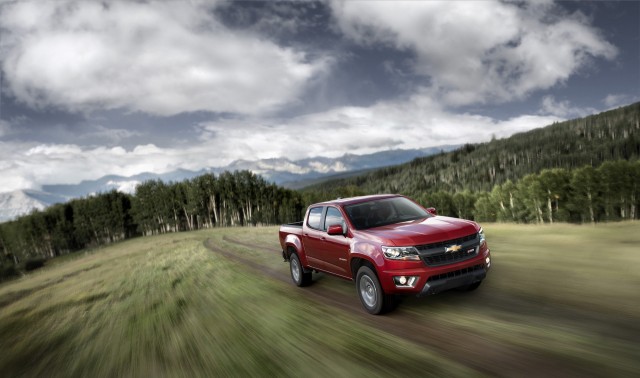 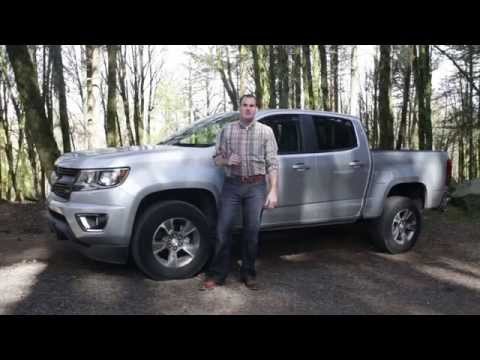 Until this year, the mid-size pickup market was almost completely stagnant for the better part of a decade. The Ford Ranger died, and the Nissan Frontier and the Toyota Tacoma were hardly updated.

Now, GM is shaking things up with a pair of new mid-size trucks--the GMC Canyon and this, the new 2015 Colorado.

CHECK OUT: The Car Connection's Best Trucks To Buy 2015

Compared to the full-size Chevrolet Silverado, the Colorado has a less squared-off, more global look. Yes, it's a truck, but the slim grille, boxed-out fenders, and rising shoulder line aren't as traditional as the Canyon.

Inside the Colorado you’ll find a closer kinship with the Silverado. It’s rugged with an upscale finish. This interior is much nicer than any Tacoma or Frontier. Those trucks feel positively antique compared to this. Fit and finish is top notch. There’s a beefy steering wheel with lots of buttons, and a big honkin’ shifter that makes you feel like you mean business.

The Colorado is available in a choice of extended-cab and crew-cab models, with a five- or a six-foot bed on the crew cab. In any of them, front seat comfort is top notch. The buckets are supportive, if a bit narrow. There's plenty of storage in bins and trays, and taller drivers won’t have an issue with headroom.

While the extended cabs aren’t good for more than hauling kids around--even then it’s tight--the crew cab is better suited for four people. That said, the cushions are a bit low and the seatbacks sit bolt upright against the bed wall.

Speaking of the bed, it's well done with 17 tie-down spots, a damped tailgate, and an available spray-in bedliner. There are nifty steps integrated into the bumper, and LED bed lighting. It’s definitely configured for day-in, day-out use.

Under the hood of the Colorado you’ll find either a 2.5-liter four-cylinder rated at 200 horsepower, our our testers' 3.6-liter V-6, rated at 305 horsepower. Power is sent to either the rear or all four wheels via a six-speed automatic transmission--though you can get a manual on four-cylinder Colorados.

If you’re hauling more than tools and bikes, or are downsizing from a mass-macho full-size pickup, the V-6 is the right pick. It has power and pulling ratings more in line with the quarter-ton trucks of a decade ago. It’s also quite smooth, and you only lose a few miles per gallon.

The Colorado and Canyon are new, and they're instantly the best-handling trucks in the class. Steering is quick and ride control is tops--even the seating position is better than the older mid-sizers.

And in terms of fuel economy, the Colorado checks in as high as 27 mpg highway but that can drop down to 24 mpg with the V-6 and four-wheel drive. A 2.8-liter in-line turbodiesel four is due to come to the lineup in 2016.

The Colorado hasn't yet been been crash-tested, but GM’s fitted more than the usual safety gear to its new mid-size truck. There are six standard airbags, oversized mirrors, and a standard rearview camera. You can also opt for technology like a forward-collision warning system and a lane-departure warning system, both a first for a mid-size truck.

The Colorado starts from just over $20,000 and comes in three trim levels: WT, LT, and Z71. Standard equipment includes air conditioning, an AM/FM radio, and a 4.2-inch color touchscreen infotainment system. Start loading it up with features such as an eight-inch touchscreen and navigation, and you’ll be facing a sticker price of nearly $40,000.

So what’s the bottom line with the 2015 Chevrolet Colorado? It's not full-size, and for many drivers, that's plenty big enough.

For more information be sure to read our full review of the 2015 Chevrolet Colorado here.