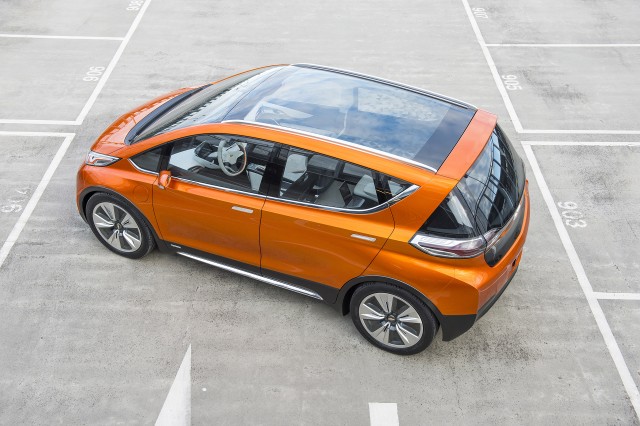 For those who've gazed upon the cute, chunky, Chevrolet Bolt electric car concept and wondered if it will ever go into production, today's your lucky day. According to Auto News, the Bolt is slated to hit the assembly lines late next year, in advance of its 2017 debut.

When GM unveiled the Bolt at the 2015 Detroit Auto Show, attendees had quite a few questions:

1. Is this the final design?
2. Couldn't you have come up with a name that's not so close to "Volt"?
3. Will the Bolt ever be more than a concept car?

As of today, the answers to those questions appear to be:

Regarding item #1, our own John Voelcker wrote a lengthy dissection of the Bolt after its debut, noting that it's likely to be based on the same architecture underpinning the next Chevrolet Sonic.

And regarding item #3, thanks to a couple of unnamed suppliers for the Bolt, we know that the electric car is going to be manufactured at a GM facility in Orion Township, Michigan, just outside Detroit. Production is scheduled to begin in October 2016. GM reps have declined to confirm or deny the rumors.

Sources say that production volume is expected to fall in the range of 25,000 to 30,000 units per year. If so, it means that the Bolt will be significantly more than a "compliance car", and that it's likely to have some aggressive marketing behind it to ensure that it sells. (For reference, the extended-range Chevrolet Volt sold fewer than 19,000 units in 2014.)

For more on the Bolt's unveiling, check out our video from the 2015 Detroit Auto Show above.