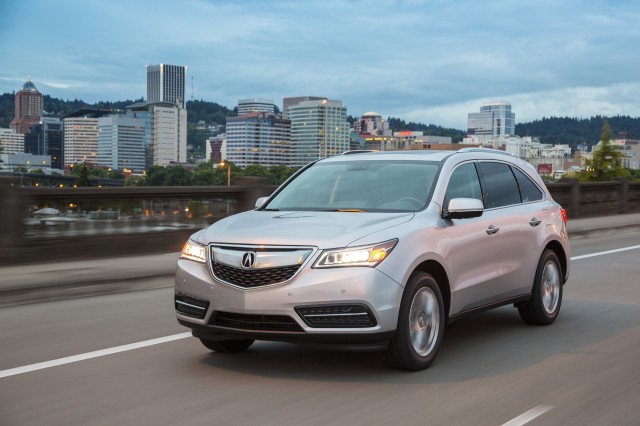 It’s been barely two years since Acura made its MDX mid-size crossover a little more sport-wagon influenced, with a warmer, more refined cabin and a much-upgraded active-safety and technology feature set.

Now for 2016, with a model that arrives to dealerships beginning this week, the MDX gets another round of updates. Although cosmetically the MDX hasn’t changed, Acura has significantly upgraded the MDX’s features, and it’s subbed in a ZF nine-speed automatic transmission.

The new transmission in the 2016 Acura MDX weighs 66 pounds less than the former six-speed automatic, according to Acura, and a new version of the brand’s Super Handling All-Wheel Drive system (SH-AWD), with a twin-clutch rear differential, saves another 19 pounds. With the weight reduction, plus enhancements to the AWD system’s effectiveness, Acura claims improved handling from the MDX.

While the nine-speed will no doubt improve drivability, performance, and general pep over the outgoing six-speed, there is one odd asterisk: the official fuel economy numbers for the MDX actually go down slightly.

But there is a way to get that mileage back, more or less. Idle Stop, which will in some conditions shut the engine off at stoplights, to save fuel, is included in top Advance models. The feature raises both the EPA city and combined numbers by 1 mpg on all-wheel-drive models by 1 mpg, to 22 mpg; but within rounding error the Combined number stays the same on front-wheel-drive models, at 23 mpg.

It’s likely that with Idle Stop you’ll see some pretty significant gains in real-world driving—more than the EPA ratings suggest—if your commute requires a lot of stop-and-go driving.

The nine-speed includes a new push-button, shift-by-wire gear selector, as well as steering-wheel paddle shifters for manual control. That allows more space around the center console.

Upgraded active safety, and useful tech for the driver

The 2016 MDX also gets a new frameless rearview mirror design, as well as a multi-view rear camera system. The AcuraWatch suite of active-safety features (which includes Adaptive Cruise Control with Low-Speed Follow, Collision Mitigation Braking, Forward Collision Warning, Lane Departure Warning, Lane Keeping Assist, Road Departure Mitigation, Blind Spot Information, the multi-view camera system, and a Rear Cross-Traffic Monitor) is now available in all versions of the MDX. Both the cross-traffic monitor and Road Departure Mitigation system are new for 2016; the latter uses a camera to find road markings and detect an unintended roadway departure—providing braking and steering inputs that will help you keep control.

The AcuraWatch suite is included with the Advance package. Additionally this year, the Technology and Advance packages are available with or without the rear entertainment system. Also new to the lineup is an easy entry seat feature that will move the seat 1.4 inches rearward when the driver’s door is opened. The entire lineup continues to offer seating space for up to seven over three rows, as well as one of the most comfortable second-row seats in this class, from our experience.

Siri Eyes Free voice recognition is new to the lineup, too, as is a head-up warning system that works together with some of those active-safety features.