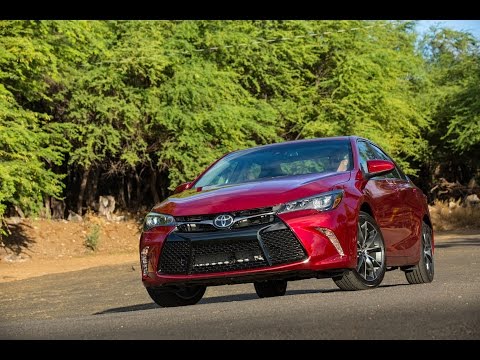 The mid-size Toyota Camry is the best-selling passenger car in the country. But with flashy new competition like the Ford Fusion and Hyundai Sonata, Toyota has stepped up to the plate with a refreshed Camry.

How does it stack up against the main players?

Inside the instrument panel has been streamlined, particularly this center stack. The buttons and knobs are larger, which we like. You’ll find either a 6.1-inch or 7-inch touchscreen depending on trim. Some of these materials feel nice, while others feel somewhat hard and cheap. Overall it’s a decent update.

Performance is strong in the Camry--if you pay for the V-6. Toyota offers a 178-horsepower four-cylinder, this car's 268-horsepower V-6, or a Camry hybrid system with a four-cylinder, electric motor, and battery pack for a net 200 horsepower. Power goes to the front wheels through a six-speed automatic transmission on the non-hybrid models; hybrids get a CVT. Unlike the Subaru Legacy, Chrysler 200, and Ford Fusion, the Camry doesn't offer all-wheel drive.

The hybrid leads the Camry lineup in gas mileage, at 43 mpg city and 39 mpg highway. The other two powertrains aren’t exactly class-leading with up to 35 mpg highway with the four, and 31 mpg with the six.

Behind the wheel the four-cylinder should be just fine for most drivers. It’s smooth, but frankly it’s a bit sluggish off the line. The suspension has been retuned, and we’re impressed with the how Toyota’s avoided the wallowing and floating of soft-riding sedans of the past. The V-6 in our test car has more than enough power for any situation--though you may find yourself wanting the bigger Avalon at almost the same price.

The hybrid model has seamless power integration and gets killer fuel economy, but it's probably the least exciting Camry to drive ever. Think about that for a second.

Inside, the Camry has very good space, but you'll want the SE's sport seats for the best comfort. As far as space in the back seat, two adults will fit fine, but three will feel cramped due to a lack of shoulder space. Good news for your tall passengers, there’s an abundance of headroom here. All Camry models feature split-folding rear setbacks, though, they don’t fold flat.

When it comes to safety, the Camry isn't quite up to the pace set by the Honda Accord and Subaru Legacy. It's an IIHS Top Safety Pick+, but the federal ratings are a little lower. Ten airbags are standard, and blind-spot monitors, adaptive cruise control, and forward-collision warnings are optional.

Starting from just under $23,000 the Camry comes standard with a power driver seat, cruise control, power features, and a rearview camera. Load it up like our XSE test vehicle with everything from the Entune infotainment system to LED headlights, and you’ll be facing a sticker price of just over $35,000.

So what's the bottom line with the 2015 Toyota Camry? It's not quite there yet, but at least it's making the effort to be more exciting.