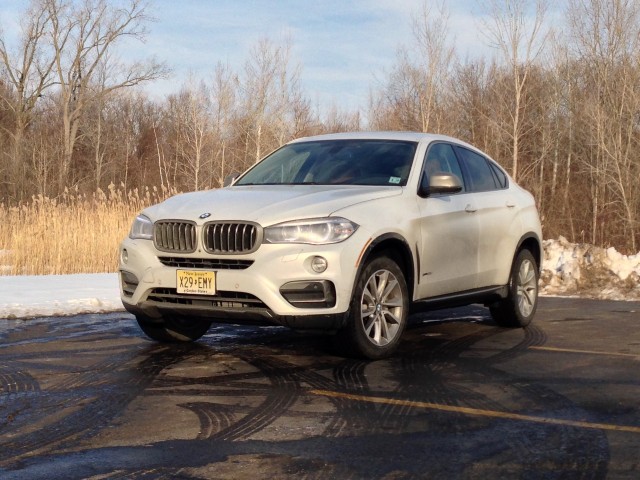 Is the BMW X6 a niche vehicle, with space and versatility compromised in favor of a more rakish roofline?

Some will rush to that conclusion. But anyone who makes such claims is more than a little misguided—and they clearly haven’t crawled around inside the latest X6, let alone taken one for a drive.

Sure, the X6 has less interior space than the closely related X5. But it’s not space that most owners are ever going to miss.

It’s easy to confuse the X6 with a host of coupe-like crossovers that in some cases—think Acura RDX—did make some big sacrifices in usability. In the latest version of the X6, there’s space to wedge three in the back seat (or two comfortably). And the portion of the cargo area you sacrifice versus the X5 (at the rear of the roofline) is one that you’d rarely, if ever, occupy with stuff anyhow.

The X6, unfortunately has one trait we found just as off-putting in the last-generation version. At a total approaching 5,000 pounds for the all-wheel-drive six-cylinder version we tested, the X6 is a heavy beast; but in acceleration and braking, BMW has bestowed the X6 with the kind of muscles and reflexes that mean it’s never an issue. Brakes are firm and easy to modulate, and there’s next to no nosedive in hard stops (at least relative to other utility vehicles).

Meanwhile acceleration is impressive for the base-engine V-6 version we tested. It’s the same single twin-scroll unit from elsewhere in the lineup, making 300 hp and 300 pound-feet of torque, and with the eight-speed automatic transmission can get the X6 to 60 mph in just six seconds. In such a large, hefty vehicle, it feels even quicker.

READ: DEA Is Spying On Millions Of U.S. Drivers With License Plate Readers

The X6 drives ever more like a tall-riding 5-Series than it did before. With the very accurate, well-weighted steering, this is about the best it gets with such a tall seating position—short of, perhaps a Porsche Cayenne. And of course that’s not considering the top-performance X6 M.

The ride was a little sharp over Michigan’s potholes and expansion joints, but we suspect the abnormally cold weather had a lot to do with that. Our car didn’t have the optional rear air suspension with Dynamic Damper Control, but we’re not sure how much it would have soothed it.

There are several drive modes that change the characteristics of the powertrain and steering. Eco mode makes shifts happen earlier and perhaps softens the throttle, but the biggest difference you might notice from that mode is that the X6 coasts much better. Engine stop/start is included in the X6, too, but with the extremely cold temps leaving the system to keep all the heat it could, we only noticed its smooth stop and restart at traffic lights a handful of times.

Click the stability control button and you get access to a traction mode that we did benefit from, especially on small residential streets that hadn’t yet been plowed after a recent snowfall—allowing us to power through with just a bit of manageable wheelspin when in the normal mode it felt like the brake actuators were working against us.

Over 585 miles of driving, with well over half of that spent in highway cruising, we averaged 21.5 mpg. Considering the temperatures were ranging down to an indicated -11 degrees Fahrenheit (-24 Celsius) during some of our drive time, that’s impressive—and it exceeds the X6’s EPA Combined rating of 21 mpg (18 mpg city, 27 highway).

With the more squared-off snout and upright grille, more sculpted sides, and a profile that’s a bit brawnier than that of the outgoing model, the X6 looks like it’s no longer trying to hide its SUV roots. Only a few of the details add a garish finish; the side gills behind the rear wheels just add clutter to the look, although they’re indeed functional—reducing wheel well turbulence, BMW says.

A fashionable roofline that doesn’t cut out the headroom

The roofline doesn’t take its downward plunge until just aft of rear passengers’ heads, so there’s actually plenty of headroom in back. Legroom and knee space aren’t quite in the realm of a full-size car or crossover, but they’re a bit more ample than in a mid-size sport sedan like the 5-Series. If you take another couple out to dinner or for a weekend jaunt, they’ll have nothing to complain about—and a taller passenger complimented the well-contoured heated seats in back, actually.

The cargo floor is about where you’d guess it to be, for a taller utility vehicle, but there’s a handy ‘secret’ storage tray underneath. Rear seatbacks do flip forward easily, to a position that’s nearly flat with the cargo floor.

All X6 models get the latest version of iDrive, now with a 10.2-inch freestanding screen. We’re still not that enthused about the menu structure, but it allows you to trace out characters atop the controller and also includes a further-developed version of voice controls.

Our test 2015 BMW X6 xDrive35i had a bottom-line price of $73,150, and while it was missing things like night vision and self parking it did include the Cold Weather Package (heated steering wheel, heated rear seats, retractable headlight washers), the Driver Assistance Package (rear view camera, head-up display), Premium Package (keyless entry, four-zone climate control, and satellite radio), as well as Multi-Contour Seats, and side and top view cameras.

We really always *wanted* to like the BMW 5-Series Gran Turismo. But soup to nuts, what BMW produces here with the X6 is more useful, more sensible, and even from a driving standpoint, pretty satisfying in all the kinds of everyday-driving situations we can imagine. The X6 now feels just a little more practical than before, in small but significant ways—ones that definitely don’t leave you the fashion victim.