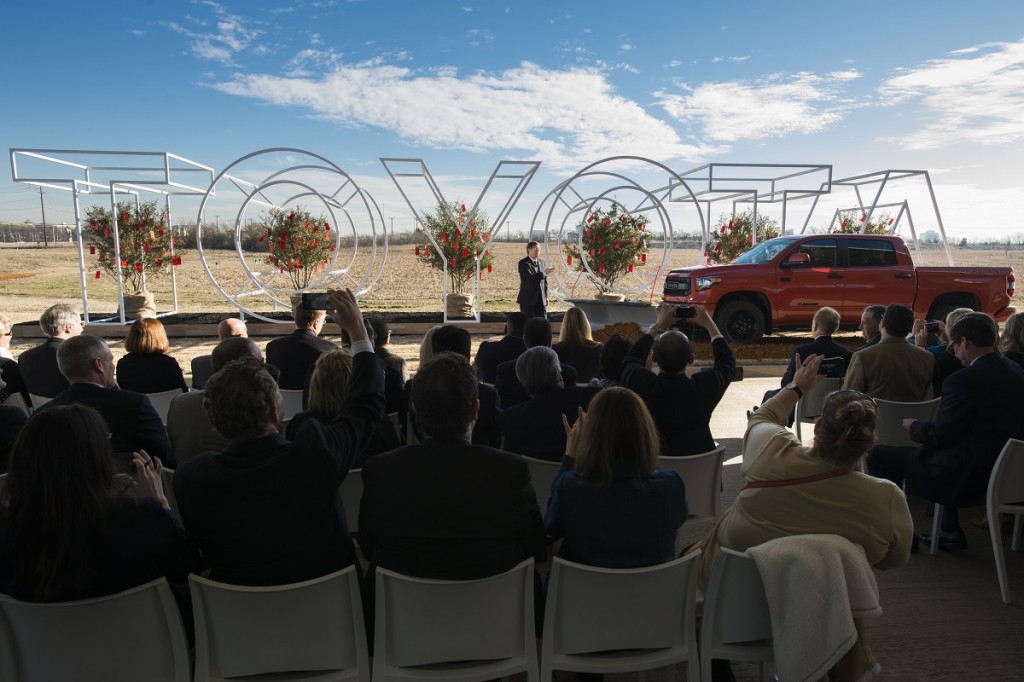 With so much attention focused on Mercedes-Benz's upcoming move to Atlanta, Georgia, some may have forgotten that Toyota is picking up stakes, too. Yesterday, the Japanese automaker broke ground on its new U.S. headquarters in Plano, Texas, with construction expected to take about two years.

It was, as these things tend to be, a heavily scripted and formal event. But beneath all the canned remarks, awkward jokes, and catchy soundbites, there was a bit of symbolism to show that, after 50 years in blue-state California, Toyota is working hard to adapt to red-state Texas.

The official groundbreaking, for example, was carried out by a Toyota Tundra, rigged up with a plow. The company could've used a bulldozer, of course, but Texas is pickup country, and Toyota was clearly trying to show that its trucks can compete with the best models from Detroit.

The ceremony also included an unveiling of the large "Toyota" sign you see above. According to Toyota, the trees inside each letter...

"...are native Texan Yaupon Holly trees, which represent 'wish' trees, a Japanese cultural tradition. Students from the Plano ISD Academy High School and community participants contributed to the event by adding handwritten notes to the trees representing their wishes, dreams, hopes and inspirations. The notes will be collected from the holly trees and placed into a time capsule at the new headquarters.

The trees will be planted permanently once the Toyota headquarters is completed and will represent the long-standing friendship between Japan and the United States and the Company’s commitment to the Plano community."

Which is a nice touch and also a not-so-subtle way for Toyota to position itself within Texas' history and traditions.

Will all that spinning pay off? Will Texas clasp Toyota to its bosom? We can't say for sure, but the $350 million budgeted for construction of Toyota's HQ could earn it a few invites to really good barbecues.