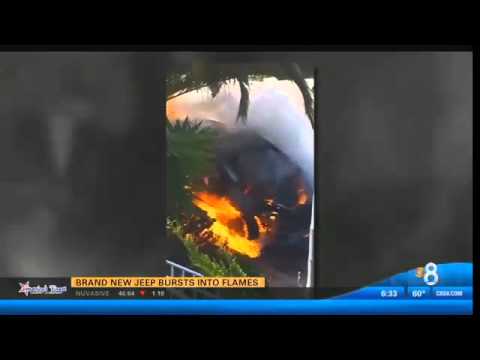 The National Highway Traffic Safety Administration has launched an investigation of the 2015 Jeep Cherokee after one California driver claimed that her vehicle was consumed by a fire less than two days after she purchased it.

A complaint posted to NHTSA's website explains that the owner noticed an "oily" smell while driving the vehicle. After parking the Cherokee at her home, white smoke began emerging from beneath the hood. Seconds later, the car was engulfed in "flames 20 feet high", and "burning oil or fuel ran down the street over 50 yards".

The vehicle was purchased new on January 2, 2015, and it reportedly had fewer than 100 miles on the odometer. The incident happened on January 4 and was captured on video.

Typically, it takes more than one complaint to trigger a formal safety probe. However, given the severity of the incident, the newness of the vehicle, and, to be honest, the fact that it was captured on film and broadcast on the evening news, NHTSA has chosen to take action now.

To date, 21 complaints about the 2015 Jeep Cherokee have been filed with NHTSA. Many have dealt with the model's transmission, but it appears that only one other owner has noticed smoke coming from the engine compartment. Unfortunately, the owner didn't have that vehicle examined by a dealer.

NHTSA's preliminary evaluation is the first in a three-step recall process. During this phase, NHTSA investigators will work with Jeep to identify patterns of failure and possible causes of the fire. If the problem has the potential to recur in other Cherokee vehicles, the probe will move to an engineering analysis, during which NHTSA will attempt to recreate the problem itself. Depending on how those tests go, the agency could call for a formal recall of the 2015 Jeep Cherokee.

A recall would affect roughly 50,000 vehicle owners in the U.S. Stay tuned.