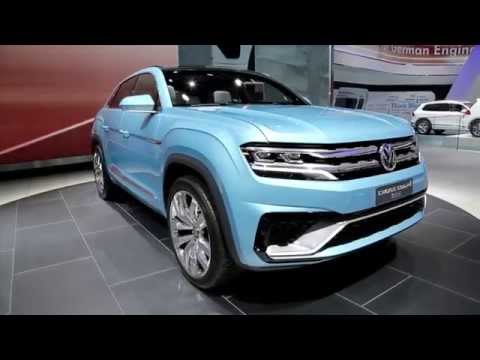 Volkswagen needs more SUVs, and over the past few years, it’s been showing future utes as concept cars. This year’s model? The Cross Coupe GTE.

The GTE shows off the new styling cues and powertrain technology coming to the new Tiguan and a new seven-seat crossover VW will build in Tennessee. Both are set to launch in the next two years.

The key themes are the strong horizontal lines, muscular haunches, and pronounced wheel arches. The headlights are fully enclosed by the grille, and both the front and rear lamps are all LED. A skidplate with an integrated diffuser is the other striking element at the rear of the concept. The interior is also supposed to preview future VW cockpits—the GTE’s horizontal dash layout is centered around a 12.3-inch digital instrument cluster and a 10.1-inch infotainment touchscreen. A second touchscreen rules the climate control. For a company that was late to touchscreens, the VW Group is all over them now.

With five seats and a coupe-like profile, the Cross Coupe GTE is sized like the BMW X6 and Mercedes GLE. It’s based on VW’s MQB platform and is powered by a plug-in hybrid drivetrain. The drivetrain pairs a 3.6-liter V-6 with two electric motors and a six-speed dual-clutch transmission. The gasoline engine delivers 276 horsepower; the front electric motor makes 54 hp. A second electric motor spins the rear wheels, and it's rated at 114 hp. They’re all linked with a lithium-ion battery rated at 14.1 kilowatt hours; it lives in the central tunnel.

All told, the drivetrain nets 355 hp, enough to accelerate from 0-60 mph in just 6.0 seconds and to an estimated top speed of 130 mph. The setup also allows multiple driving modes, including an all-electric mode, a maximum power mode where all power sources are working, and a Battery Hold / Battery Charge mode where the vehicle can maintain a certain level of charge so that it can be used when required. Charging can be done using a wall outlet or on the road using the gasoline engine or brake-energy regeneration.

VW estimates the fuel economy of the Cross Coupe GTE to be about 70 MPGe. The all-electric range, meanwhile, is about 20 miles.

The Cross Coupe GTE isn’t a production-ready vehicle, but VW is building two new SUVs, and soon. The seven-seat model enters production next year in Tennessee, with the smaller ute replacing the Tiguan sometime in 2017.