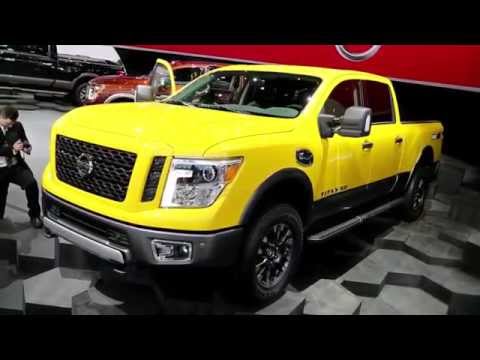 Twelve years ago, it was brand-new, and a big challenge to the big American-brand pickups. Today, it's the oldest full-size truck on the U.S. market, and the slowest seller.

Will this major redo put the 2016 Nissan Titan on the truck-buying radar of middle America— or will it remain an also-ran?

With the Titan, Nissan says it has a truck with the styling of a powerful precision tool. Better aerodynamics come from a trio of front, roof, and tailgate spoilers, and underbody airflow covers.

But aerodynamics aren’t the news—diesel is. And not just any diesel, but a Cummins turbodiesel V-8. It’s the first of three drivetrains planned for the big Titan—along with a gas-powered V-6 and V-8.

There’s no official power rating yet for the Cummins edition, but with it, Nissan says the Titan XD can pull more than 12,000 pounds, and carry more than 2,000 pounds in its pickup bed. Fuel economy also hasn’t been pegged, but it’s estimated at 20 percent better than competitive gas-powered V-8s—so we expect something like 20 miles per gallon on the EPA combined cycle.

The Titan will come in three cab styles--Single Cab, King Cab, and Crew Cab, with a much improved cabin in all of them. The Titan’s seats get zero-gravity comfort, the console grows deep enough to hold a laptop, and heated and ventilated seats are new to the cabin.

As for the pickup bed, the nifty Utili-Track set of movable cleats returns, and so does the spray-in bedliner. The Titan XD also adds available watertight locking storage boxes in the bed that are accessible inside the bed without removing a cover. And for towing, there's a first--a built-in gooseneck tow hitch that helps reduce trailer sway by putting the attachment point for the hitch ahead of the rear axle.

Along with its new four-wheel-drive electronica, the 2016 Titan gets an available rearview camera, one with guides that help with hitching a tow vehicle to the truck. Nissan's pioneering surround-view cameras will be an option as well. So will blind-spot monitors, and front and rear parking sensors.

Other features will include LED headlights and bed lighting; Rockford Fosgate audio; remote start; and a navigation system with smartphone connectivity is available.

We’re waiting on pricing details and a first drive of the new Titan later this year—stay tuned as the Nissan pickup rumbles toward a midyear launch.