Beyond The Cross Coupe, Volkswagen's Plan To Take Over America Involves Adding 100 Dealers 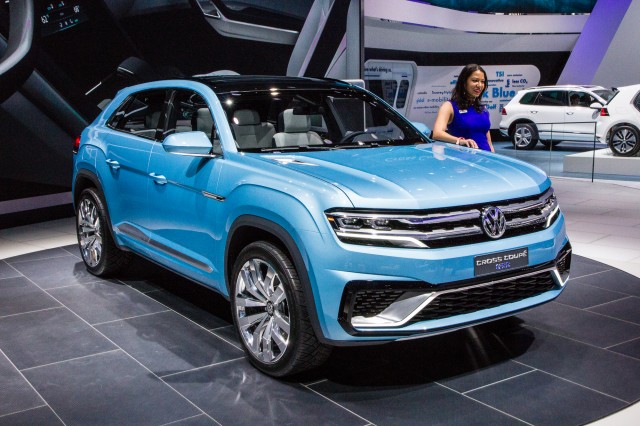 In most parts of the world, Volkswagen is a top-selling auto brand, but America isn't like most parts. Sadly, unless more U.S. consumers start swilling VW's Kool-Aid, the German car company will never achieve its goal of dominating Planet Earth's auto market by the year 2018.

That annoying fact has gotten under VW's skin, but the company has a two-part plan to improve the situation:

1. Next year (or possibly in early 2017), it's launching a midsize crossover called the Cross Coupe GTE. On the floor of the 2015 North American International Auto Show, the Cross Coupe looked pretty stylish -- far better than VW's previous attempts to sate America's hunger for crossovers, and even better than the CrossBlue concept on which it's based.

2. According to AutoNews, the company is planning to add 100 U.S. dealers to its sales network by the end of 2018. The goal is to place those dealers in unserved and underserved markets and, in turn, get vehicles like the Cross Coupe into more American driveways.

Will VW's war strategy work? It's hard to say.

Expanding VW's dealer network seems like a great tactic, but as AutoNews points out, the company already has about 650 U.S. outlets -- more than VW has had at any time in the past 22 years. And yet despite that relatively large sales network, the company still managed to lose ground last year.

So, while dealerships are undoubtedly important to sales, increasing their number may not be the silver bullet VW is looking for. As any marketer will tell you, it doesn't matter how many locations you have, if you don't offer products people want, you're sunk.

And that's where the Cross Coupe comes in. VW has a lot of hopes pinned this brand new model. Is it more attractive to you than the rest of the Volkswagen lineup? Can it save the day? Or is it just more of the same? If you were in charge of VW, what would you do? Share your battle plans in the comments below.