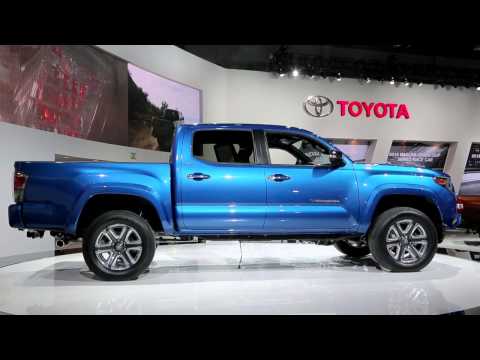 Here’s your first look at the 2016 Toyota Tacoma.

No, it’s not a radically new look, but it shows that with the full redesign this popular pickup line is getting for 2016, it’s going to even more closely emulate the look of full-size trucks—with a chunkier, more fortified look and more macho stance.

Inside, we expect that to be countered with a softer, more finely detailed cabin, with some of the Tacoma’s hard plastics finally replaced with materials that compete solidly against the latest mid-size trucks from GM, the Chevrolet Colorado and GMC Canyon.

We expect a four-cylinder engine to remain available at the base level, but don’t be surprised if Toyota ups its game with the top V-6, with more power and torque as well as higher towing and hauling ratings.

The Tacoma hasn’t seen a full redesign since 2004, when the Tacoma was upsized from what had still been a compact truck to one that was a true mid-sizer in most of its versions. While this model doesn’t appear to get significantly larger than the outgoing model, it also does little to address the calls for a more maneuverable, manageably sized compact truck lineup.

CHECK OUT: Audi Unveils A Smartwatch To Unlock Your Car: Is The Key Officially Dead?

Toyota makes some current Tacoma models in Mexico and others in San Antonio, Texas. The automaker hasn’t yet confirmed whether it will continue the same with the new model.

Check back this next week, as we'll bring you full details on the Tacoma, including plenty of live photos, as part of our coverage of the 2015 Detroit Auto Show.