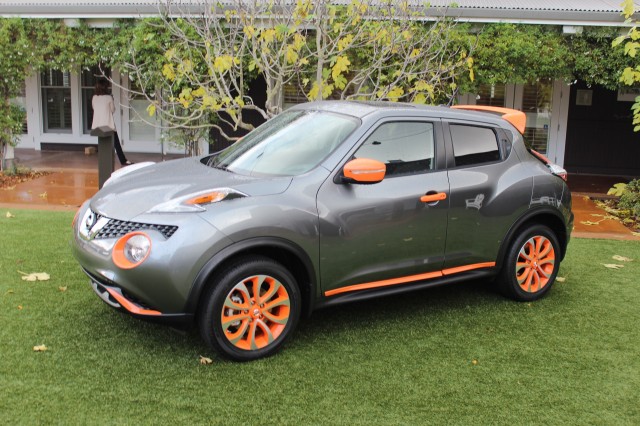 The Nissan Juke is headed into its fifth model year, yet it’s no closer to blending in with the rest of the compact crossover market. Rather, it looks and feels as defiantly different as ever.

We’ll soon have more vehicles on the market with which to compare the Juke—models like the Honda HR-V, Fiat 500X, and Mazda CX-3, joining the Subaru XV Crosstrek and Kia Soul, among others. They're all relatively close in overall size and width (about the same footprint as a subcompact car). But we suspect that none of these models will manage the same sort of mix (or shall we say contrast) of utility, coupe-like grace, and somewhat tweaked-out rally-racer influences.

ALSO SEE: Why The 2015 Nissan Murano's 'Gearless' CVT Feels Like It's Shifting

That said, sizing up the 2015 Nissan Juke still brings lots of questions to mind. Is it a far more practical take on what the younger set wants in a coupe, or is it a crossover that’s had too many Pop Rocks and energy drinks? It's really both, and the oxymorons keep coming in full-on, bi-polar fashion when you focus on how it drives.

We just, a couple of weeks ago, had the chance to take the 2015 Juke out on a quick driving loop, of only about 20 miles altogether, and spent the remainder of an hour crawling around its interior and getting a refresher course on its unique look and packaging.

That’s because Nissan has given the Juke a mid-cycle refresh for; but thankfully, that mainly involves mainly just redoing the headlights and taillights, and making some feature and equipment changes. The Juke gets Nissan’s more sharply styled, ‘boomerang’ lights front and rear—of the design that originally made its debut on the Z sports car—and instead of corrupting an otherwise cohesive design, as mid-cycle refreshes can sometimes do, the new headlight and taillight designs actually do the design good, puctuating the angled-back profile and other sporty cues.

There are a lot of sporty cars that we like to drive in Sport mode, but the Juke isn’t one of them—even though we like driving it quick. That’s because the CVT seems to want to hold the revs higher, even when you’re accelerating at a moderate pace; with no absence of engine noise, it somehow conspires to wear at you a bit more.

The thing is, there's no need to keep the engine screaming; the 188-horsepower, 1.6-liter four-cylinder seems to love the lower-middle of the rev band, producing lots of usable torque even below 3,000 rpm. Drive the Juke in Normal mode (all accessed through a 'D-Mode' button, as through the somewhat gimmicky, so-called I-CON performance-display system) and while you may give up a bit of momentary response, it’s just as quick ultimately.

There’s lots to love from the driver’s seat. The driving position itself is great; it’s rather high, and you get a great view ahead and outward. The front seats themselves (just the base ones, in the SL we drove, rather than the upgraded ones in the NISMO and NISMO RS) are surprisingly supportive, and the steering is on the light side but very precise and quite confidence-inspiring with weighting that builds off center in a way that feels proportionate to the Gs you feel from the seat.

What a fun driver's car, although a harsh passengers' car

And that, altogether conspires to create what’s a surprisingly fun driver’s car. Yes, the Juke rides high, but you’ll find yourself confidently whipping this tall hatch around tight corners, on power, all with reassuring tactile control through the steering wheel and seat.

We only revisited the front-wheel-drive Juke, but in the past we’ve found all-wheel-drive Jukes to feel more sluggish, with no real driving reward, as their AWD system is more traction-oriented than handling-oriented.

Subcompact proportions and urban sensibilities are surely assets with respect to parking and maneuverability, but inside the 2015 Juke there's less space than you might think. The rear seatback flips forward, but it amounts to a surprisingly high cargo floor—although at the very back there’s a useful underfloor cargo compartment.

Furthermore, your passengers might chime in plenty about how the ride just isn’t well sorted. It can be punishing on roads with a patchwork of repairs, with an underlying boom that might add to fatigue. Simultaneously, there’s a disconcerting bounding that can occur during hard cornering. All the negatives are ride-related, seemingly, while nothing gets in the way of this vehicle’s fun, predictable handling.

More features at the base level for 2015

Nissan has, for 2015, brought the Juke's feature list much more in line with its presentation, and it's now a vehicle that offers at least some of the advanced features that its sporty, fashion-forward exterior might suggest. Intelligent Key with push-button start is now included in all Jukes, as is a backup camera and Bluetooth. And the starting price is an affordable $21,075.

Unfortunately if you want a manual, that now requires stepping up to the significantly more expensive Juke NISMO and NISMO RS—although those models get all sorts of upgrades, in the NISMO RS’s case including four-wheel vented disc brakes, a helical limited-slip differential for front-wheel-drive models, and Recaro sport seats.

In a vehicle market that’s flooded with vehicles that make concessions, the Juke bucks blandness entirely. While we’re still not sure what to make of it, it’s a vehicle that’s definitely grown on our editorial staff over time.

It's not for everyone. Refreshingly, that's part of the point.

As we conclude in our bottom line on the 2015 Nissan Juke, this is a vehicle that’s part rambunctious, high-octane rally-racer and part defiantly different crossover. You’ll have some strong feelings about it one way or the other, and that’s what makes it a market standout—and, perhaps, the surprise niche hit for those who simply won’t drive what everyone else has.