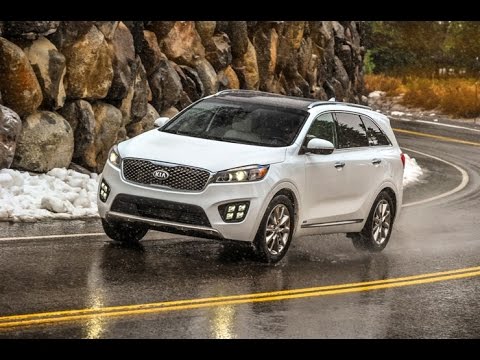 It’s not just because this completely redesigned, third-generation Sorento felt mostly unfazed, driving through a Sierra Nevada winter "storm of the decade" that brought 100-mile-an-hour wind gusts and made some stretches of steep highway quite slick indeed.

It’s this: Kia has built what feels, almost, like a German car. In terms of ride and interior ambiance, it might be mistaken for a vehicle with a VW badge. Or perhaps, from the inside, the Jeep Grand Cherokee.

The 2016 Sorento takes aim directly at the Grand Cherokee, and the Toyota Highlander. You might recall that the Jeep was one of the targets of the ill-fated Borrego, a quite good body-on-frame utility vehicle that arrived on the market a bit too late, too thirsty—and right at the cusp of the recession.

Meanwhile, the Sorento has grown—more than three inches in wheelbase and overall length—and the result is a vehicle that’s no longer awkwardly in with the Honda CR-V and Toyota RAV4, albeit slightly larger. Now, it sizes right in line with the Grand Cherokee and Ford Edge, and within a few inches of the Toyota Highlander, Honds Pilot, and Ford Edge.

It’s also grown more refined. Much more refined—to the degree that in a top-of-the-line Sorento SX-L we'd be hard-pressed to name a luxury model in which the whistling of strong sidewinds and the noise of wet, slushy roads would have been better isolated. Considering the tremendous attention paid to interior surfaces, it feels like it could have a luxury badge—definitely more successfully than the Cadenza sedan.

We’ve mused that Kia has had the Sorento on a constant improvement plan; but it couldn’t be more true. Kia just gave the second generation of the Sorento—around since 2010, when it shed the old body-on-frame layout—a major refresh for 2014, with a new V-6, much-improved interior refinement and, according ot the automaker, about 80 percent new parts. Now Kia has given this model a complete redesign, and with the 2016 model the Sorento’s changes go well beyond incremental improvements.

Mark 3 for one of Kia’s best-known nameplates

The exterior of the Sorento has such soft, evolutionary change that you need to look at the new model a detail at a time. Ultimately, it’s the blunt, more upright grille and front end, the somewhat higher hoodline, and the greater overall length that let you override the urge to conclude that these are carry-over lines. Inside, there’s far more convincing change, with a completely new instrument-panel layout offering controls for audio/infotainment and climate control bunched in horizontal ‘pods’ and loads of impressive soft-touch trims and materials.

Base 2.4-liter four-cylinder models make 185 horsepower and 178 pound-feet of torque and, like all Sorento models, come with a six-speed automatic transmission and can be equipped with front-wheel drive or so-called DynaMax all-wheel drive—which ties in with inputs like yaw and steering angle and can apportion torque without wheelspin, definitely something we appreciated up on slick mountain passes. 2.0T models step up to 240 horsepower and 260 pound-feet, while with V-6 models you get ratings of 290 hp and 252 lb-ft.

V-6 and base four-cylinder engines remain offered in the Sorento as last year; but the new addition to the lineup—and the best pick, in our opinion—is the new 2.0T model, offering a direct-injection, turbocharged 2.0-liter four-cylinder engine making 240 horsepower and 260 pound-feet of torque. While the V-6 might have 50 more horsepower, the 2.0T model is the one that actually felt perkier in most types of driving—all but off-the-line acceleration. There’s a bit of turbo lag in some situations, but it’s entirely forgivable and peak torque comes on strong at just 1,450 rpm; as such, the six-speed automatic seems to work better with it than with the V-6 and doesn’t downshift nearly as much or as dramatically.

Sport Mode, yes, but don’t get your hopes up

A Drive Mode selector provides Sport, Normal, and Eco modes. But don’t get too excited by the thought of a sport mode; it only changes the shift points, and the steering bost, nominally—not accelerator tip-in, which still should feel a little more linear and easier to finesse in tight traffic or slippery conditions. And fundamentally, the Sorento just doesn’t feel like a sporty or particularly sharp-reacting vehicle. Which is fine, considering the mission.

One thing that’s been a Kia weakness throughout most of its model line—a ‘restless’ steering feel, on center—has been mostly quelled here, as far as we can tell. During times when strong crosswinds let up, on our drive, we found a good sense of center and impressively confident tracking.

Sorento models with the four-cylinder, oddly, have an entirely different power-steering configuration. Models with the 2.0T engine have a rack-mounted electric power steering system, while those with the four-cylinder and V-6 get a column-mounted one. We’ve heard good arguments for favoring both of these setups, so the takeaway isn’t that one’s superior but that Kia’s made some good tuning decisions—better ones, it seems than in the Sorento’s Hyundai Santa Fe cousin.

We’d much rather be behind the wheel of the Sorento than the Toyota Highlander, with its rubbery responses and unremarkable, sea-of-plastic interiors. On the other hand, it gets fuzzier when you compare the Sorento, and its upgraded interior, with the lavish Grand Cherokee—and, of course, with the Grand Cherokee’s available tough off-road ability. The Grand Cherokee has a heftier driving feel, and some might prefer the Sorento’s somewhat more responsive feel to it; and the current Grand Cherokee has never won kudos for being space-efficient.

Our gripes are relatively few, and other than that second-row seat and the headroom situation they mostly have to do with the odd limitations in builds. For instance, you can’t get what we now see as the best engine in the lineup—the turbo four—with a third-row seat. And if you want the V-6—for its higher towing capacity, for instance—you have to accept a third-row seat. So in other words, it’s not much different from the Hyundai builds.

And if you want the top active-safety equipment (Lane Departure Warning System, Forward Collision Warning System, Around View Moniror, and Smart Cruise Control), it’s only offered on the top-of-the-line SX-L, as part of an option package. So those who don’t want all the luxury items (like the power tailgate, the moonroof, or the chrome wheels) but do want top safety, the Sorento is not a particularly good pick or strong value.

Moving up a size, without moving up much in price

Base L models, at around $25k, are an absolute steal if you want the most vehicle for the money—essentially Honda CR-V money for a vehicle that’s a size larger, and somewhat better equipped. But at the top of the model line it seems that the Sorento costs just as much as rival models. After taking a look at some of the trims in person, and seeing what you get with each, we tend to think that the best-value pick is the EX model, where you step up to all the refinement upgrades that make the Sorento so refined and sophisticated-feeling. and where you get items like dual-zone automatic climate control, heated leather seats, and backup warning, and can opt for blind spot detection and lane departure warning.

SX and SX-L models get excellent driver’s seats, with extendable thigh bolsters that are godsends for long-legger drivers like this one. But the second-row seats are a little short and lack contouring that might help for adult use. Oddly, the third row is doable, for those up to about 5’-10”.

Kia has indeed added more noise insulation throughout the Sorento, and most versions include acoustic glass for the windshield and side glass. But the key to the Sorento’s unflustered, German-car ride might be its all-new body structure, which has more than twice as much high-strength steel and is far stiffer; and the reengineered front and rear suspensions are a key partner in keeping the ride rather firm but very absorbent.

The 2016 Kia Sorento goes on sale in January, and we hope to post an expanded set of driving impressions soon thereafter, with some of it on dry pavement. Until then, what you need to know is that the Sorento has grown and grown up—and it’s definitely worth the wait.