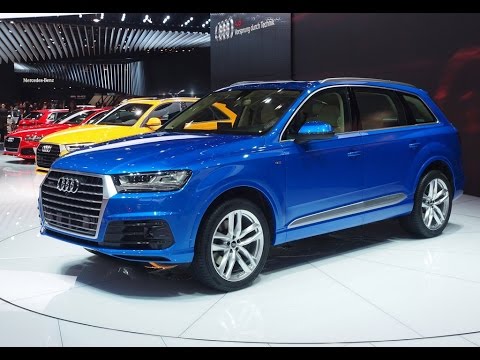 The 2016 Audi Q7 will be unveiled officially at the 2015 Detroit Auto Show, and a major crash diet accompanies the second generation of the popular crossover SUV.

The Q7 is one of the first vehicles to ride on a new "MLB Evo" platform penned for the Volkswagen Group's mid-size cars and crossovers. Completely reengineered, the Q7 has managed to drop more than 700 pounds in its transition to the new architecture. From a curb weight of more than 5,000 pounds, the Q7 now checks in at 4,398 pounds in base trim, Audi says, thanks to extensive use of aluminum and high-strength steel.

The handsomely predictable shape doesn't read as sleek as the first-generation Q7, ironically, but Audi does say it's one of the lightest seven-seat SUVs in its class--and one of the most spacious, with more interior volume than before despite somewhat slighter exterior measurements.

On the powertrain menu, Audi will fit the new lighter-weight Q7 with its first-ever turbocharged four-cylinder, a 2.0-liter unit rated at 252 horsepower and 273 pound-feet of torque--a powertrain expected to become the core engine for the upcoming Q5 as well. Bigger-displacement options will include a supercharged 3.0-liter V-6 with 333 hp and 325 lb-ft of torque, and a 3.0-liter turbodiesel six rated at 272 hp and 443 lb-ft of torque.

The VW Group's plug-in hybrid technology will make its way into the Q7 too, eventually. A plug-in hybrid turbodiesel with a lower output rating is in the offing for European markets, but in the U.S., the Q7 may adopt a plug-in 3.0-liter turbodiesel hybrid with a net output of 373 hp and 516 lb-ft of torque--a powertrain that Audi suggests will be able to drive 35 miles on a single battery charge, and could earn an overall economy rating of 138.4 MPGe.

Audi's virtual cockpit--the full-screen infotainment system replacing the gauges that's found in the 2016 Audi TT--will be included in the new Q7, as will the latest version of MMI, with a touchpad controller. Audi's 4G LTE service, custom tablets for rear-seat passengers, 3D audio, and smartphone connectivity with Apple CarPlay and Android Auto are to be featured. Safety technology will include adaptive cruise control with traffic-jam assistance: it allows the car to stop and restart itself and follow the car ahead at low speeds, to relieve tedium.