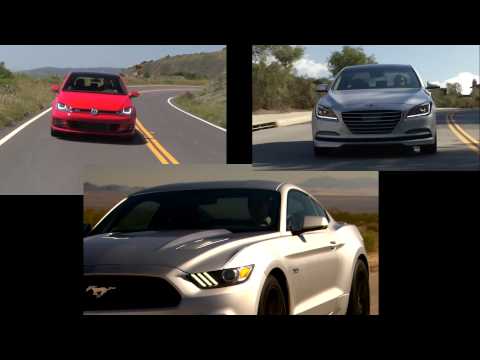 The 2015 North American Car & Truck/Utility of the Year (NACTOY) Awards will be announced at the 2015 Detroit Auto Show on Monday, January 12. High Gear Media’s own executive editor and NACTOY juror Marty Padgett will make the announcement.

These are the finalists for both the Car and Truck/Utility of the Year awards, based on the thoughts and experiences of the 50 NACTOY jurors, gleaned across multiple drives of each car throughout the year.

The end result is the panel’s top choice for each category, picked from among the model year’s new entrants.

READ: $2 Gasoline Is Back! Is That Good?

2015 North American Truck/Utility of the Year:

Thus far in NACTOY history, the award has been handed out 21 times, with 12 of those awards going to American brands, another 4 to European carmakers, 3 to Japanese brands, and 2 to Korea’s Hyundai.

This year’s finalists were selected from the cars already rising to the top of the NACTOY deliberations in October, when the official Short List was announced. The Short List nominees can be seen below.