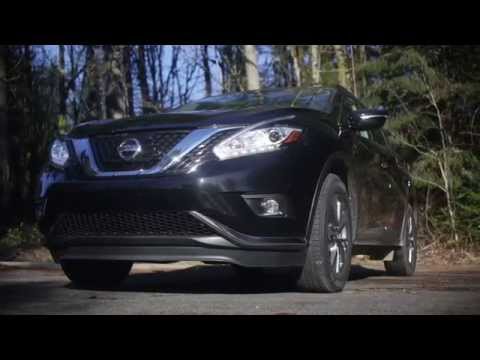 As we’re getting acquainted with the 2015 Nissan Murano for the first time, it’s eye-opening to note all that this mid-size crossover doesn’t have: There are no multiple drive modes here, no variable steering assist settings, and no steering-wheel shift paddles, no low range or towing mode either.

This is a vehicle that’s easy to figure out. You get in, and the driving interface is what most people are used to, yet with just the right gloss, gleam, blanketing, and buffeting.

READ: Why The 2015 Nissan Murano's 'Gearless' CVT Feels Like It's Shifting

And yet on the outside, it’s gloriously complex. It’s as much a rolling sculpture as some sports cars, and you’re turning heads, every step of the way. The Murano really is that good-looking—and something refreshingly different next to the likes of the Hyundai Santa Fe, Ford Edge, and Jeep Grand Cherokee.

That aside, for the moment, the 2015 Nissan Murano feels like it was cleverly reverse-engineered to be exactly what it needed to be—stylish, comfortable, quiet transportation for empty-nesters, with plenty of capability to bring friends along.

There’s a lot more than a grain of truth to that. The second-generation Murano, which made its debut in 2009, never lived up to the sales numbers of the first-gen model—although in all fairness, the recession may have been more to blame.

Nevertheless, Nissan reached out to existing owners of the Murano and asked them what they wanted a future Murano to be. From that, “Provocative, Premium, Optimistic,” was the theme used to sum up the feedback. Owners wanted, above all, a vehicle that was visually striking yet sophisticated.

Straightforward in its mission, stunning in its presentation

And they sure did get it with the 2015 Nissan Murano. What makes this one of the most noteworthy new vehicles of the year from an otherwise straightforward, predictable template is the absolutely stunning exterior of this crossover.

In profile, in stance, and in the exterior details, the Murano follows very closely in the steps of the Resonance Concept that was shown at the Detroit Auto Show less than two years ago. And we can actually say we like the production car better, for its synergies in some of the design details, in the ‘boomerang’ design of the headlights and taillights, the ‘V-motion’ grille and hood sculpting, and in how the arched flare above its front wheelwell is echoed over the rear wheels, where the beltline pinches upward toward the ‘floating’ roofline in one of the most distinctive design cues.

The overall result is a vehicle that plays a multitude of visual tricks—appearing lower and far more sport-wagon-like than its predecessor. It’s unlike any other crossover, whether with a luxury badge or a mainstream one.

Murano owners wanted a vehicle that was even more daring in appearance, without giving up comfort. And they wanted even more refinement and features inside—with an interior that they could happily use to take other couples out on a date, or for a weekend-afternoon trip to Wine Country, for instance.

So Nissan reached out for something new, and sculpted the interior after the early jet age of the 1960s, “when travelers were pampered with luxury and flew with style,” elucidated Ken Lee, the senior creative manager with Nissan Design America, where the Murano was designed.

In short, we love the result. The wraparound look doesn’t limit interior space, and there are plenty of fresh details. For instance, there’s no woodgrain anywhere inside—no fake woodgrain either. Instead, there’s a brushed-metal style trim used for the interior beltline and door and console inserts; but even better, we’d choose the light-colored material that looks a bit like Mid Century Modern linoleum.

All the while, there’s a simple layout to the interior. Nissan has reduced the number of physical buttons from 25 down to 10, but used them where they make sense—like for the climate control—and there’s a straightforward infotainment system that responds well to navigation and infotainment needs.

In California’s Napa Valley region, during the #rainpocalypse this past week, we piloted several different front- and all-wheel drive versions of the Murano, finding it confident and surefooted—and perhaps more notably, finding the interior sublimely quiet and isolated from the gales and pouring rain.

Familiar goods under the hood

The Murano doesn’t have anything groundbreaking under the hood, but its familiar 3.5-liter V-6, making 260 horsepower and 240 pound-feet of torque, feels quick, smooth, and relatively responsive with the continuously variable automatic transmission (CVT), which is essentially a version of what’s used in the Pathfinder.

The Murano also doesn’t have the issue that affects a lot of its other CVT-equipped vehicles—sluggishness at lower speeds when you need a quick burst of power. Thanks to plentiful low-rev torque from this engine, it gathers speed quickly as the CVT lowers the ratio. And if you accelerate at more than half throttle (but not quite full throttle) you’ll find the transmission now follows some pronounced ‘gears’ along the way—as part of a so-called ‘D-step’ strategy.

The way the Murano rides and handles is very carlike, and much like that of a large sedan—albeit maybe with a little more body lean. The electrohydraulic rack-and-pinion steering has a good, relaxed feel on center, and it loads up nicely. One thing to keep in mind is that models with the 18-inch wheels handle just as well as those with the 20-inch wheels—except for a slight bit more precision in quick transitions. With the larger wheels, you do introduce more road harshness as well.

In any case, the ride is composed and very comfortable. So is the seating, which has been conceived to be just as accommodating to those in back as in front. The so-called Zero Gravity design—for more back support—not only applies to the front seats but to the outboard seats in back. And while the front seats didn’t entirely win us over, those back seats we’d venture to say are best-in-class.

With a wide center console and those impressive seats, Nissan terms the middle area of the vehicle conversation alley; considering the quiet interior, you should have no problem catching up with back-seat passengers while cruising along.

Thanks to reduced weight and improved aerodynamics, the Murano is about 20 percent more fuel-efficient than the outgoing model, Nissan says. That leads to new EPA ratings of 21 mpg city, 28 highway for the entire model line—and our 24-mpg average over a mix of road conditions suggests you might see about that or better in real-world driving.

The Murano has always fit into a different place in the market than most of Nissan’s other vehicles. Like the Maxima, it’s more of a gateway to luxury-brand models; and in its best-equipped models, it’s a full-fledged luxury vehicle in all but the badge.

This year that’s underscored with the introduction of a new, top-of-the-line Platinum model that adds things like ventilated front seats, heated back seats, LED headlamps, and power-folding rear seatbacks. Blind Spot Warning and Rear Cross Traffic Alert is included, and on the Platinum and the next-highest SL you can opt for a Tech Package that adds Blind Spot Warning, Forward Emergency Braking, and Predictive Forward Collision Warning.

How does the Murano add up for value? That’s one we’re still pondering. In all, the top Murano SL and Platinum models feel like true rivals to the Lexus RX 350 or Acura MDX. But at about $46k for a loaded Platinum they’re not priced much higher.

You'll find a lot more detail over at our full review pages for the 2015 Murano. But overall, we tend to think that the Murano S and SV models, with their low-to-mid-30s price tags, offer the strongest value of the lineup. That’s where you can actually stop focusing on what the Murano doesn’t have and instead relish what it does have: stunning good looks, an ease about the driving experience, and a true four-adult interior that might just remind you how much fun road-tripping can be.