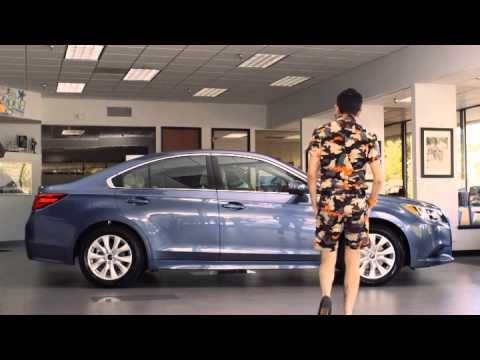 Automakers have used limited-edition models to commemorate a range of important things -- holidays, sporting events, and of course, Hollywood movies. For today's World AIDS Day observances, Subaru teamed up with fashion designer Mondo Guerra to create a special 2015 Subaru Legacy that's limited to an edition of one.

The partnership between Subaru and Guerra is a natural. Subaru has worked to raise funds for HIV/AIDS service organizations for 20 years -- in part by sponsoring the "Love Responsibly" campaign, which promotes "Dining Out For Life" events across the country. Subaru's Tim Tagye explains that Love Responsibly has a two-fold purpose:

"To expand Subaru's association with Dining Out For Life into a year-round initiative that encourages people, including Subaru retailers, to volunteer their time or other resources locally, and to encourage discussion within all communities about what more can be done to help in the fight against AIDS."

Guerra is no stranger to HIV/AIDS activism, either. As an HIV-positive designer and well-known Project Runway alum, Guerra has taken every opportunity to raise awareness of HIV/AIDS causes and end stigmatization of those infected and affected by the two.

And so, Subaru asked Guerra to gussy up one of the company's all-new 2015 Legacy sedans as part of the Love Responsibly campaign. It was a no-brainer to Guerra, who says:

"I’m extremely honored to contribute to the Love Responsibly campaign because it’s centered on corporate, social and individual responsibility. I'm inspired by the story-telling, it’s empowering and heartfelt, and to tell that story through a creative process of expressionist art that becomes the exterior of an automobile – well that’s like creating the ultimate street art."

Of course, Guerra isn't the first fashion designer to tackle an automobile. But in this case, rather than creating a fully customized Legacy, Subaru asked Guerra to think in terms of a wrap. It's a clever idea -- a nod not only to condoms, which have been key in reducing the spread of HIV, but also to the Legacy as art object. That's appropriate, because the specially wrapped vehicle debuts today as part of the opening festivities planned for Art Basel Miami, one of the world's largest events for creators and collectors of Modern and contemporary art.

You can see a bit more about Mondo's design process in the video above. To learn about World AIDS Day and what you can do to mark the occasion, click here.