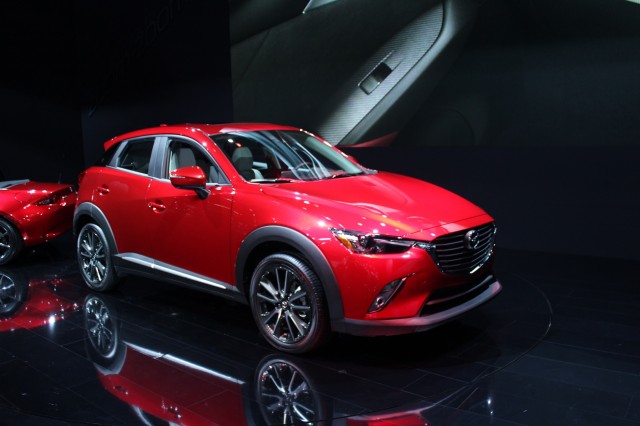 A wave of pint-sized crossovers is coming to America next year, and among them is this car, the smallest Mazda crossover yet.

The CX-3 is petite, that’s for sure. But it’s not alone in its new niche. It will compete against cars like the new Honda HR-V, Chevy Trax, the Jeep Renegade and Fiat 500X.

The CX-3’s advantage over those other crossovers could be its style. The design is a knockout, and it fits in nicely with the rest of the new Mazda range. The best details are these narrow headlamps, the strong curves stamped into the side panels, and the blacked-out pillar in back that makes the roof look like it’s floating.

Inside the CX-3 has a pretty spare design, with a relatively high beltline and a dash that’s very straightforward, with big round vents and climate controls. If you’ve been in the current Mazda 3 lately, you’ll feel right at home as the layout and controls are nearly the same.

Under the hood of the 2016 CX-3 you’ll find a direct-injected 2.0-liter four-cylinder engine mated to a six-speed automatic transmission. Mazda hasn’t released power figures, but the same engine makes 155 horsepower in other applications. The CX-3 is normally a front-driver, but all-wheel drive is going to be made available.

Mazda promises us a roomy interior, at least in front, where the driving position is set high for better visibility. Only a few dimensions have been confirmed, so it’s tough to tell whether the CX-3 will have more interior and cargo space than the new Honda HR-V.

The CX-3 hasn’t been crash tested yet but Mazda says it’s been engineered for good protection. Available active safety features should include radar-based forward-collision prevention, though there are few specifics. Other features will include the Mazda Connect infotainment system with a rotary control knob and a 7-inch screen that juts out from the dash. There’s also a Top Gun-style pop-up Active Driving Display.

Mazda hasn’t announced pricing or fuel economy, and won’t until we get closer to the on-sale date sometime in 2015. For more information be sure to read our full preview of the 2016 Mazda CX-3 here.