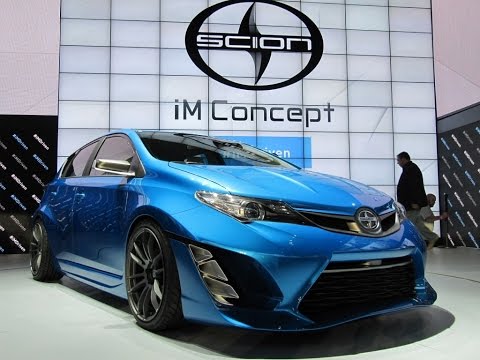 Scion was Toyota’s fast-growing brand in the 2000s, but in the past few years it’s gone a little stale. Toyota’s set out to change that at the 2014 Los Angeles show with a new concept car that will lead to two new Scions next year.

Scion’s billing the iM as a good fit for urban drivers with sporty handling, easy parking ability, and a price under $20,000.

The concept is based on the European-market Auris. It’s a five-door hatchback, dressed up here with a wide stance and low ride height for auto-show crowds. There are some deep air intakes and cool fog lights up front. The boy-racer effect is topped off with big 19-inch alloy wheels that sit flush with the body. For now at least, Scion isn’t showing off the interior of the iM.

There’s also no drivetrain confirmed yet for the U.S. market. In Europe, this hatchback is sold as a diesel, a hybrid, and as a gas-powered car. By the time the production version shows up at the 2015 New York auto show, we expect it to share a powertrain with the Toyota Corolla. That means a four-cylinder engine powering the front wheels, with a choice of automatic and manual transmissions—basic economy-car fare.

Strip away the glam, give it a normal ride height, real fog lights, and dial back the Fast and Furious looks, and this is pretty much the production Scion hatchback that will make its debut in April alongside another new Scion. It’ll arrive just in time to give Scion the mainstream car it needs—and to give Toyota a replacement for the long-gone, but slick, Toyota Matrix hatchback.

For all the latest news from the 2014 LA Auto Show be sure to check The Car Connection.