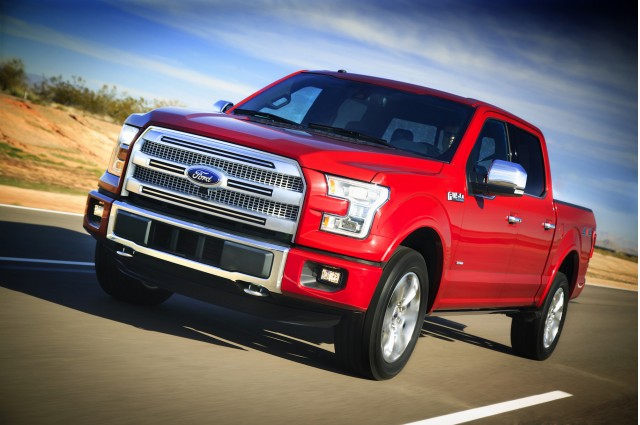 The F-150 now has the highest fuel economy ratings—by a smidge—of any full-size gasoline-powered pickup on the U.S. market. When equipped with the new 2.7-liter turbocharged V-6, which makes 325 horsepower and 375 pound-feet of torque, the rear-wheel-drive F-150 earns EPA ratings of 19 mpg city, 26 highway (22 combined).

This new engine also gives the F-150 a noteworthy max towing rating of 8,500 pounds, as well as an excellent max payload of 2,250 pounds.

With this truck family’s new aluminum-intensive construction, a weight loss of several hundred pounds, and a revamped lineup of powertrains, as well a long list of other efficiency-minded engineering changes, it’s no surprise that their mile-per-gallon numbers are significantly improved versus their predecessors.

Ford compares that to V-8 versions of rival models, and the F-150 with this small V-6 under the hood does remarkably well. For instance, 2015 Toyota Tundra 4x2 models with the (smaller) 4.6-liter V-8 engine, which only manage 6,800 pounds of towing capability and a max payload of 1,605 pounds. And while 5.3-liter and 5.7-liter V-8 models of the Silverado and Ram 1500 have stronger towing numbers, their payload is in the same ballpark—with the F-150 430 pounds higher in payload than the Ram, actually.

The available 3.5-liter EcoBoost (turbocharged) V-6 is the top engine in the lineup for those who want the most towing ability. It earns an EPA-rated 17/24 mpg, and can pull up to 12,200 pounds—a number that stacks up well against the Silverado 6.2-liter’s 12,000-pound rating—or haul up to 3,270 pounds.

Ram 1500 EcoDiesel outdoes it on mpg, not running costs

The Ford turbocharged engines are designed to run on regular unleaded gas, whereas the pump price of diesel is currently much higher—currently $3.66 for diesel, versus $2.89 for regular-grade gas, according to the U.S. Energy Information Administration (EIA).

The takeaway: Kudos to Ford, but let's see about real-world numbers

These F-150 2.7-liter models could make a lot of sense if they do return much-improved numbers in everyday use; check back in the near future as we report on that, and put them to the test with some real-world tasks.