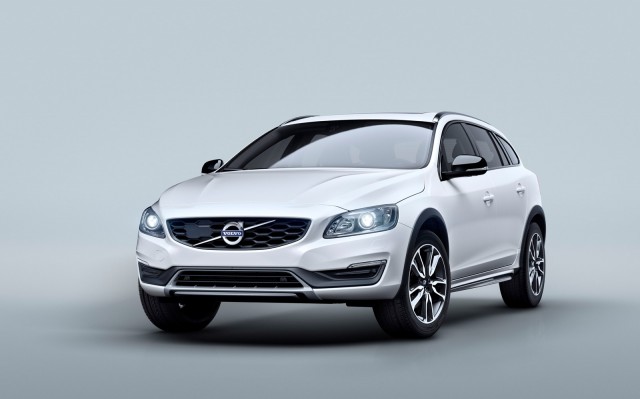 The 2015.5 Volvo V60 Cross Country takes aim at busy weekend warriors who reject big, cumbersome SUVs yet take to the trails (or the mountain, or the river) on the weekend.

And with this model’s official debut at the Los Angeles Auto Show this week, Volvo put a starting price on the Cross Country: $41,925. That’s about $8,000 more than the 2015 Subaru Outback 3.6R (the top-of-the-line Outback that it most closely competes with), yet $1,300 less than the entry price of the 2015 Audi Allroad.

That includes skid plates front and rear, along with scuff plates, protective black wheel-well-lip trim, and new black trim on the rear greenhouse, along with standard navigation, upgraded Sensus Connect infotainment, park assist, power retractable mirrors, and a special wheel design. Leather seats are of the upgraded, contoured style, and there are various other trim upgrades.

In all, that’s more features than the Outback—or the Allroad, in standard guise—although both of those other models might offer somewhat more passenger space than the Cross Country.

The V60 Cross Country has 2.6 inches more ground clearance than the 2015 Volvo V60 Wagon on which it's based—for a total of 7.4 inches—but we wouldn’t be surprised if this upcoming model handles nearly as well. According to Volvo, the suspension is tougher, modeled after the setup in the XC70, although tuning is slightly more toward sportiness than absolute comfort.

As with Volvo’s other all-wheel-drive models, the V60 Cross Country will come powered not by the latest Drive-E turbo four, but by a tried-and-true engine, the 250-horsepower, 2.5-liter in-line five-cylinder. It’s paired with a six-speed automatic transmission, and Volvo has said that the combination will deliver an EPA 23 mpg Combined.