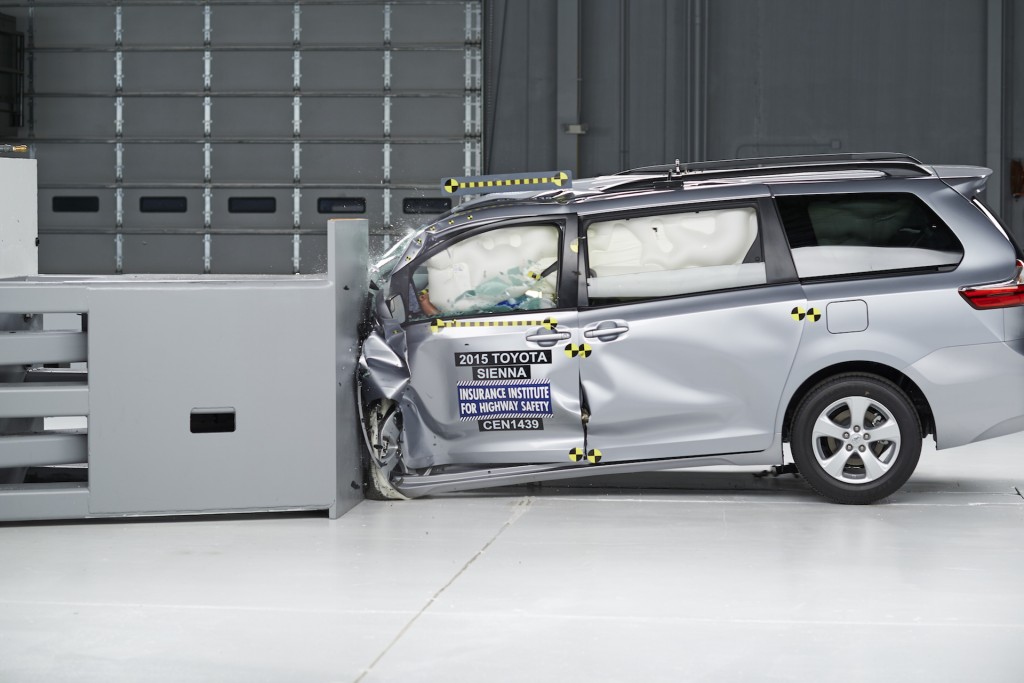 The Insurance Institute for Highway Safety (IIHS) has finally put some of the most popular minivans through its newest small-overlap crash test--and for a trio of vans, the scores are not good.

The small-overlap test simulates the impact of a vehicle with a narrow object, such as a telephone pole, at a speed of 40 mph. Vehicles must earn a score of Acceptable or Good to earn the IIHS' top honors, their Top Safety Pick+ award.

Prior to the most recent tests, the only current minivan to endure the small-overlap test has been the Honda Odyssey. The IIHS gave it a score of Good, which also made the van one of the IIHS' Top Safety Pick+ award winners.

The latest batch of vehicles tested included the Toyota Sienna; the Dodge Grand Caravan and Chrysler Town & Country twins; and the Nissan Quest.

Another new minivan, the Kia Sedona, was not tested. According to the IIHS, Kia requested time to make some structural changes so that the new-for-2015 Sedona would have a better chance of earning the top scores.

The scores, and some shocking results

As family vehicles first and foremost, the results for the small-overlap test for some minivans weren't just disappointing. In one case, the IIHS called the minivan "one of the worst performers we've seen."

That van wasn't the Toyota Sienna. Of the minivans tested, the Sienna was the only one to earn an Acceptable small-overlap rating. Since it also offers an optional forward-collision warning system with automatic braking, it qualifies as a Top Safety Pick+ for the 2015 model year. The IIHS notes Toyota made structural changes to improve the Sienna's small-overlap performance, but that it still measured a fair amount of intrusion at the upper door hinge--intrusion that was blocked by the Sienna's side airbags. 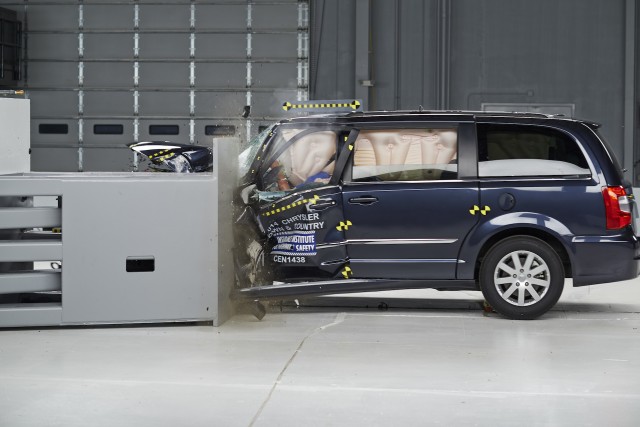 In the case of the world's best-selling minivans, the results were disappointing. The Chrysler Town & Country suffered major crash intrusion at the pillars, and the IIHS notes damage to the crash-test dummy, and that the side airbags didn't cover enough of the dummy to protect it from forward intrusion.  Its performance was scored Poor by the IIHS; the score applies to the 2008-2015 Town & Country as well as the identical Dodge Grand Caravan--and to the related, discontinued, 2009-2012 VW Routan. 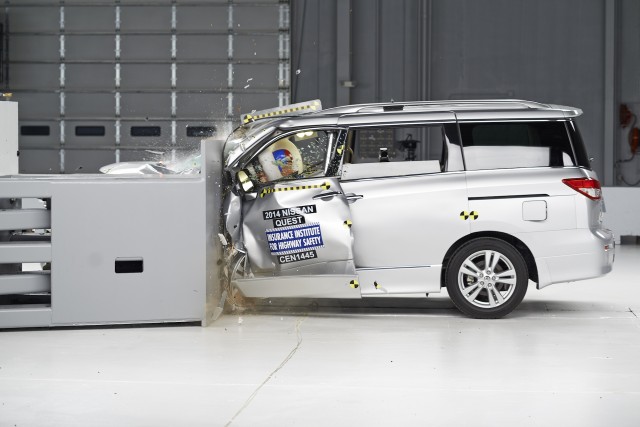 For the relatively new Nissan Quest, the results were disastrous. The IIHS says the impact so badly damaged the vehicle's structure, the dummy's leg became trapped--and that the structure moved enough to trap the dummy in place with the detonated airbag. Serious leg injuries were deemed likely, given the Quest's rating of Poor, which applies to models sold in the 2011-2015 model years.

The IIHS explains that it's difficult for many vehicles to pass the new test with flying colors--minivans in particular, since they're often based on car platforms but are widened to accommodate more passengers. That means crash forces meant to carry down their body structures weren't designed to meet the new, tougher test. That's explicitly the case with the Chrysler minivans, which were last redesigned for the 2008 model year--four years before the small-overlap test came into existence.

Whatever the circumstances, the minivan's reputation as a safe family vehicle has taken a hit.

"Minivans are popular among parents, a group that tends to be safety conscious," explained David Zuby, IIHS executive vice president and chief research officer, "but we’ve only seen two so far that offer decent protection in small overlap crashes."