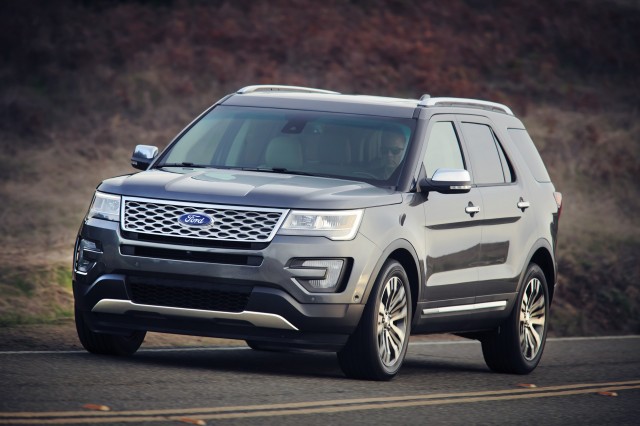 The Ford Explorer, an iconic utility-vehicle nameplate now in its 25th year, and the best-selling three-row SUV in the U.S., gets revamped for 2016.

While a more powerful 2.3-liter EcoBoost four-cylinder engine option and a new look are part of it—and you no longer have to step up to a V-6 to get four-wheel drive—there’s other news: The 2016 Ford Explorer is moving upscale.

ALSO SEE: Out Of Their League: 6 Vehicles With Shocking Sticker Prices

Don’t expect prices to be all that much higher on the new Explorer lineup as a whole; but a new Explorer Platinum model, first shown in a preview just before the Los Angeles Auto Show press days this week, takes better aim at top-of-the-line, models like the Grand Cherokee Summit and GMC Acadia Denali—models that are luxury vehicles in all but the brand.

Explorer chief engineer Arie Groeneveld said that the automaker listened carefully to existing owners about what they would like to see different about the Explorer. Many of them simply wanted a more luxurious, refined vehicle, without giving up ability or efficiency; and that’s what guided the path to the changes to the 2016 model, which goes on sale next summer.

According to the automaker, two models that the Explorer team would consider key rivals—the Jeep Grand Cherokee and GMC Acadia—were selling strongly in the $45,000 to $50,000 range. That’s a price range where the Explorer wasn’t doing as well in sales volume, and part of the issue was that it simply wasn’t filling that need for ever-more-lavish interior appointments and other features.

The Grand Cherokee isn’t a direct rival packaging-wise, as it offers two rows of seating versus the Explorer’s three rows, but they are cross-shopped—and familiar names that have been relatively close in sales in recent years.

The new Explorer Platinum level comes with Nirvana leather upholstery that Ford says is the softest it’s ever used in a regular-production model. The look is refined with special quilted-look door inserts inside, additional details like leather-wrapped armrests, and satin-chrome trim inside and out. And with new acoustic glass and a retuned suspension, it should all add up to a more luxurious experience. It’s also the first production Ford model yo carry a brushed aluminum oval instead of the Blue Oval.

Other features on the Platinum include adaptive cruise control and collision warning with brake support, lane-keeping, enhanced park assist, 500-watt Sony audio, and a new all-digital 10-inch gauge cluster—the first such display Ford’s offered on any of its models.

Will the Platinum help bring the Explorer back up in popularity? It probably won’t bring Explorer sales anywhere near where they were in the model’s heyday, in the early ‘00s, but with those changes, and the more efficient four-cylinder models on the way, it may lead more shoppers to wonder if they need a luxury badge.