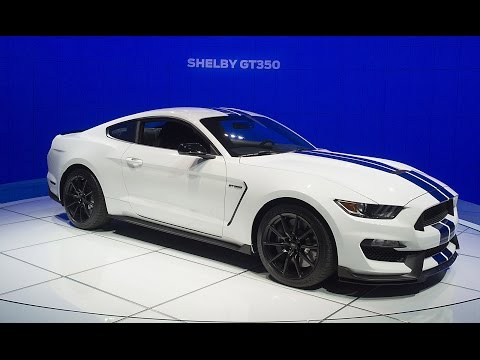 READ: Out Of Their League: 6 Vehicles With Shocking Sticker Prices

But if you want to put an exact number to what’s under the hood, hold your horses. Ford hasn’t yet released some of the important numbers, like acceleration times, the top speed, or even the horsepower or torque figures. Although it will say that the GT350 makes more than 500 horsepower and more than 400 pound-feet of torque.

There’s a traditional naturally aspirated V-8 under the hood, but the design of this engine is anything but traditional. Ford borrowed some engineering influence from racing, with this ‘flat-plane crankshaft’ design offering freer breathing and higher revving than normal V-8 designs.

Shelby Mustang models have always offered something special; and this GT350 is no exception. While all Mustang models go to a new independent rear suspension that positively affects ride and handling for the entire lineup, the GT350 gets Ford’s first application of MagneRide suspension technology. Using special hydraulic fluid with suspensed iron particles, the system can change the stiffness of damping by applying an electric current—modifying behavior to each wheel independently every 10 milliseconds.

With a Torsen limited-slip differential, the active-damping system, and brake and wheel upgrades, the GT350 promises performance that should fully back up what’s under the hood.

An advanced carbon fiver composite grille opening and available tower-to-tower brace help keep the body stiffer during extreme performance driving, while the hoodline has been lowered and resculpted, with new aerodynamic elements to help reduce drag and help provide additional cooling. A Track Pack will add an engine oil cooler and transmission cooler.

Inside, the Shelby GT350 is clearly a Mustang, but special Recaro sport seats are perhaps the most noticeable upgrade—as well as a revamped gauge cluster. And inside, the chrome and bright finishes have been reduced or eliminated to cut glare.

That said, you can get many of the creature comforts offered in other Mustang models. Upgraded Shaker Audio, automatic climate control, and an eight-inch version of MyFord Touch are all included with the Tech Pack.

The Shelby GT350 will make its official bow later this week at the Los Angeles Auto Show. Head to our show coverage over at Motor Authority for more on the GT350, and all the news from the show.