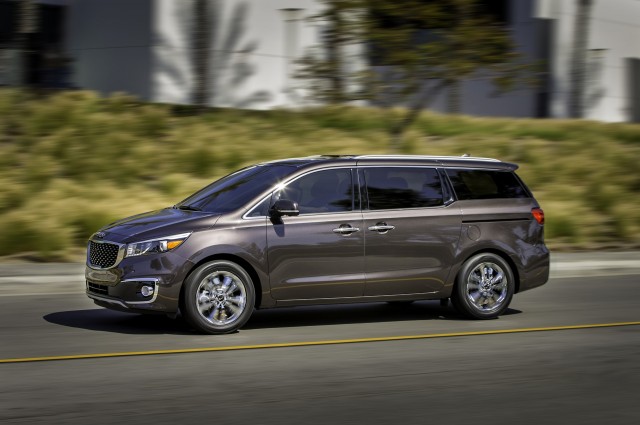 If you’re shopping for a minivan, you’re probably looking at one of the four best sellers — the Toyota Sienna, Honda Odyssey, the Chrysler Town & Country, and the Dodge Grand Caravan. This year, Kia hopes you’ll take a look at a fifth new model—the new Sedona.

For 2015 Kia’s given its minivan the Sedona a fresh set of lines and a revamped set of features. Is that enough to make it a good alternative to the Big Four?

Minivans are all about the interior. The Sedona's cabin is downright charming, with its horizontally laid-out instrument panel, its two-tone looks, and the better materials applied to its surfaces. In the front, you’ll notice Kia has raised the seating position of the driver’s seat somewhat for better visibility.

In the second row, most Sedonas get what Kia calls Slide-'N-Stow. It’s a middle-row seat system that can slide forward and flip upright to allow an especially low, level floor without the need to remove seats. It’s not as versatile as Chrysler’s Stow-'N-Go, but it makes for a big cargo space when you need one.

The top Sedona SX-L drops Slide-N-Stow for ‘first-class’ lounge seating with retractable lower leg rests and headrests with winglets. These seats can be moved side to side to make a wider path to the back row, but they can’t be removed.

That third row seat is too small for teenagers and adults, unlike the Honda Odyssey and Toyota Sienna. Smaller kids will fit easily, though, and the seat does split 60/40 and folds flat right into the floor.

Kia has taken the time to upgrade the Sedona’s features for a new minivan generation. The smart key fob opens the hatch when the key is near the rear end for about three seconds. There’s a cooled glovebox, power ports, and USB ports too, along with Bluetooth streaming and Kia’s UVO smartphone connectivity interface.

From the outside, the Sedona takes no risks in styling. The front end is now cleaner, with a Kia family grille that fits well on the Sedona's big front end. There's no mistaking its minivan profile, though.

Under the hood of the Sedona you’ll find a 3.3-liter V-6. The 276-hp six runs very smoothly behind lots of layers of sound deadening, but the Sedona weighs a lot, so acceleration is just adequate. Power is sent to the front wheels through a six-speed automatic with smooth shifts.

The Sedona rides quietly and comfortably, so long as you don’t throw it into corners. All-wheel drive is not available. Fuel economy on most models rings in at 20 mpg combined.

Kia says it’s aiming for top crash scores, but no ratings are available yet. A rearview camera is available on all but the base model, but surround cameras are fenced off in the most expensive model.

Read Our Full Review Of The 2015 Kia Sedona

The Sedona starts from just under $26,00 and comes well equipped with Bluetooth, steering-wheel audio controls, and a back-up warning system. Load it up with everything from adaptive cruise control to a full leather interior, and the sticker balloons to a Honda-like $43,000. The sweet spot is the $32,995 Sedona EX, which comes with power sliding side doors and a power tailgate; eight-passenger seating; pushbutton start; and leather seats.

So what’s the bottom line with the 2015 Kia Sedona? It’s now a fine alternative to the Sienna and Odyssey—and beats the Chryslers on refinement, though it falls short on ultimate flexibility.

For more information be sure to read our full review of the 2015 Kia Sedona here.