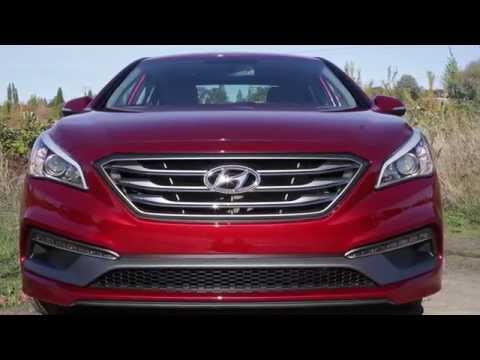 Is that enough to keep up its strong challenge to the Camry, Accord, Fusion, and Altima? We've taken an in-depth look at the new Sonata in our latest video road test.

It’s obvious from the outside, how Hyundai’s toned down the Sonata’s look for 2015. It's more sophisticated and more conservative, and we think over the long run, it will age better than the previous Sonata. But most of the curves and chrome are muted—it just isn’t as eye-grabbing as before.

Inside, things have been straightened up a bit, too. Hyundai has grouped controls into distinct zones, and that makes it easy to navigate the dashboard. Overall the look is more organized, and less showy.

Up front, you’ll find plenty of space for six-footers, and the seats are better than in the past Sonata. There’s more bottom cushion length and better bolstering on the Limited and Sport 2.0T models. No matter which model, there’s plenty of storage for keys, smartphones, and random stuff.

The back seat’s improved a little, too. It isn’t quite as roomy as the Passat or Accord, but there’s still plenty of leg room for six-footers to sit behind six footers.

Under the hood of the 2015 Hyundai Sonata you’ll find either a 2.4-liter four with 185 horsepower, or a 2.0-liter turbo four with 245 horsepower. No matter which engine you choose the power is sent to the front wheels through a six-speed automatic transmission with manual controls. There’s no more manual transmission option, and all-wheel drive is still not offered.

There’s also a new Eco model which pairs a 1.6-liter turbo four with a seven-speed, dual-clutch transmission for higher fuel economy. It has an output of 177 horsepower and 195 pound-feet of torque. It has perky acceleration and a booming exhaust note. It’ll likely become the base Sonata soon.

By the way, if you’re wondering about the Sonata Hybrid, it’s carrying over with the old body style for 2015. A new hybrid and plug-in hybrid model are expected to replace it within a year or two.

Fuel economy rings in as high as 32 mpg combined with the Eco model. Opt for the base car and that drops to 29 mpg while the 2.0-liter Turbo drops that to 28 mpg. The hybrid is carryover with a 38 mpg combined rating.

Read Our Full Review Of The 2015 Hyundai Sonata

From behind the wheel two things become clear pretty quickly: the powertrains have been sent to finishing school and the suspension and steering have been heavily updated for the better. The engines are no longer brash and unrefined, and the suspension is now more settled at any speed. The skittishness is gone, replaced with compliance and less drama. It’s moved from the Fusion to the Altima side of the family-sedan spectrum.

Safety is a high point in the new Sonata. Both agencies give it top marks almost across the board. Seven standard airbags include a driver’s knee bag, and the Sonata now offers blind spot monitors, adaptive cruise control, and a lane departure warning system.

The 2015 Sonata has a base price of about $21,000, and that includes Bluetooth audio dreaming, a USB port, and 16-inch wheels. You’ll need to spend at least $23,160 to get the version we recommend—the one with a rearview camera. Load it up with blind-spot monitors, LED taillights, 18-inch wheels, and a panoramic sunroof and you’ll face a sticker price of just over $34,000.

So what’s the bottom line with the 2015 Hyundai Sonata? It blends in better than ever in the top tier of family sedans.

Be sure to read our full review of the 2015 Hyundai Sonata here.