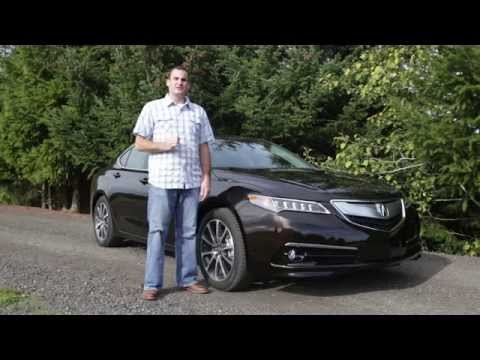 If you walk into an Acura dealership and look for a TSX or TL sedan, you might be in for a shock. Both of those sedans have been killed off. In their place is the new Acura TLX, a mid-sizer that stacks up against favorites like the Audi A4 and Volvo S60.

Is the TLX the car to kickstart Acura’s revival?

The TLX may not be what you call beautiful, but it is good looking. Acura's front-end design has been toned down and softened a bit. We like the multi-element headlights, and the character line that flows into the flared rear fenders. Its best angle is from the rear three-quarter view.

Inside the TLX is quite a pleasant place to be, if you’re in the driver's seat. The gauges are attractive and easy-to-read, and the center stack with its dual-screen setup looks pretty high-tech. Move over to the front passenger seat though and things get a bit bleak and awkward with the massive amount of black plastic.

The TLX is a tweener, as it sits between the TSX and TL in length and wheelbase. Inside it’s spacious enough with good front and rear seat space. There’s also ample trunk space. The issue isn’t really space, though--it’s the materials. They're nice enough, but they don’t shout premium, certainly not in the way the Mercedes-Benz C-Class does.

Under the hood of the TLX you’ll find a 2.4-liter four-cylinder engine rated at 206 ponies mated to an eight-speed dual-clutch transmission and a torque converter. Why a torque converter? Because it eliminates all the lurch and jerk a traditional dual-clutch setup can send to the front wheels.

Need more power? You can opt for the available 290-horsepower 3.5-liter V-6 and nine-speed automatic. The standard V-6 is also a front-driver, but for those of you in the snow belt states, all-wheel drive is an option with the V-6.

Read Our Full Review Of The 2015 Acura TLX

Which powertrain works best? The base four-cylinder, absolutely. It just drives better. It’s lighter and that makes it feel more tossable, and more nimble. Some of that is due to its all-wheel-steering system, which directs the rear wheels to help the fronts steer more easily at low speeds, and more accurately at high speeds. We’ve driven the V-6 version, and it feels heavier, and that nine-speed transmission can seem a bit lazy. In either case, you’ll notice how quiet the TLX is on the highway. Wind and road noise are nearly non-existent below 80 mph.

The other benefit of going with the four-cylinder is fuel economy of up to 35 miles per gallon highway, though the V-6 is close, at 34 mpg highway.

The TLX is new and hasn’t been crash-tested yet, but Acura’s been at the forefront of crash protection. Features on the TLX include seven airbags, LED daytime running lights and a rearview camera; options include Adaptive Cruise Control, blind-spot monitors, and a Lane Departure Warning system.

The TLX starts from about $30,000 and comes well equipped with power features, Bluetooth, satellite radio, and a USB port. Load it up with the Technology and Advance packages, and the TLX gets those active safety systems, navigation, heated and ventilated front seats and premium audio with 10 speakers and HD Radio. Loaded you’ll be facing a price tag of about $45,000.

So what’s the bottom line with the 2015 Acura TLX? It’s an impressive return to form for Acura sedans, especially in more affordable four-cylinder form.

For more information be sure to read our full review of the 2015 Acura TLX here.