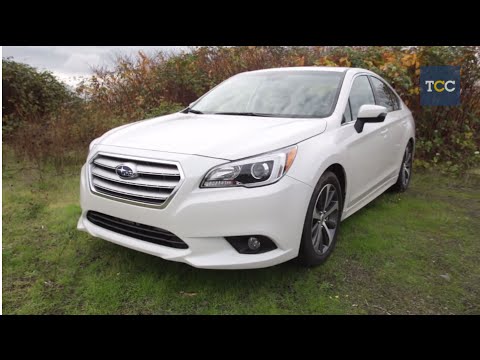 The 2015 Subaru Legacy is feature-packed, polished, secure, and spacious. It’s outgrown its niche appeal, while dollar for dollar, it’s an irresistible value in today’s new-car market. And it’s The Car Connection’s Best Car To Buy 2015.

The Legacy follows the 2011 Hyundai Sonata, 2012 Ford Focus, 2013 Ford Fusion, and most recently, the 2014 Subaru Forester as our top pick among the year’s entire crop of completely new or redesigned models. Simply put: Of what’s new this year, it represents the best value on the market.

We understand that value means something different depending on your own priorities; and to represent most of those priorities, we rank every new model we review in six key categories, to arrive at an Overall Rating that lets you quickly size up which models you should consider.

And of all those, the 2015 Legacy is the one that we think you’d be remiss not to include on any value-minded sedan shopping list.

It wasn’t easy picking a winner this year. The 2015 Mercedes-Benz C-Class is one of the most tantalizing luxury-car values on the market—one with absolutely stunning styling, inside and out. And if you can stay resolved in getting only the base C300, the sticker price of just under $40,000 represents good value. Likewise, the Hyundai Genesis gets our top overall score among new models (8.8), and it’s a great all-around luxury car—provided you’re not too focused on the badge, or wanting things like a V-8 or all-wheel drive that make this a pricier and less agreeable car.

It’s the value factor that really nudges the Legacy ahead of every other contender—including those two models. For less than $23,000 you can get a solid mid-size sedan with all-wheel drive—an all-weather convenience that pushes you to a larger engine or a much higher sticker price in any rivals that DO offer it.

The top value of the lineup, as we see it, is the Legacy Premium four-cylinder model, optioned with EyeSight, the already top-rated accident avoidance system that now includes blind-spot monitoring, lane-departure warnings, and rear cross-traffic alerts. It’ll actually brake automatically in some situations to keep you safe and sound, and it even includes active cruise control and new steering-responsive fog lights—and that’s all for a sticker price that’s still under $26,000.

On the road, the Legacy is more responsive and engaging than most other simple mid-size sedans, and somehow carries a lot more personality through to the driver’s seat. And if you want more power and smoothness, there’s a 3.6R model, here, that loads on more features and offers a hint of luxury-car character, for just over $30k.

Overall there’s a good deal more grace and refinement with this generation—Subaru has finally found a way to damp out the road and engine noise that used to be an issue in some Legacy models. They also found more usable interior space than more other mid-sizers.

Even though this is the second win here for Subaru, we don't think the automaker should rest on its laurels. The design, to be blunt, isn’t anything special, and the attractive, quite functional infotainment systems in the Legacy don't go beyond merely feeling on par with the rest.

Safety credentials, with EyeSight, rival what’s offered in luxury cars with several times the sticker price, however. Subaru claims to have raised the occupant-safety bar, as well, and we expect that to translate to nothing less than a carry-over of its top-notch 2014 model-year results, including five stars overall and in every single primary category and almost every subcategory. In Safety, it’s rated a 9 out of 10 now, but if it achieves that it’ll be made a 10--which we're anticipating in our award.

The Legacy is a redesigned model this year, but it’s worth pointing out that the nameplate has a very strong reputation for reliability on its side.

The value for the money here is indisputable. Just as Subaru did with the Forester that won this award last year, the automaker has taken what used to be a niche sedan and updated it for mainstream appeal. You may not have thought to put it on your list next to nameplates like Altima, Accord, or Fusion—but now, you should.