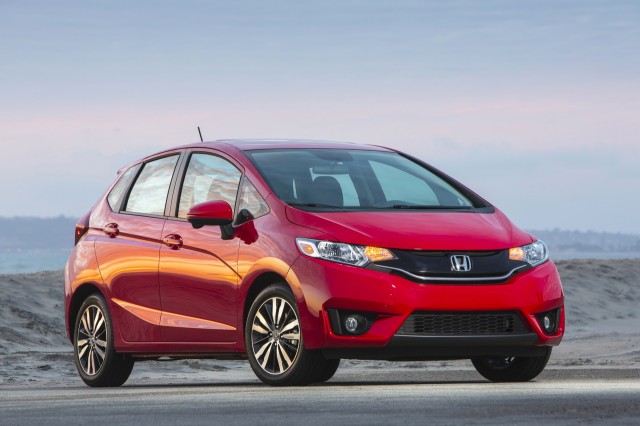 Urban commuters, you're looking at one of the best picks in a lean, space-conscious and fuel-efficient small car. If your priorities include maneuverability, versatility, value, and pretty much everything practicality-related, then the 2015 Honda Fit is one that you really must include—one of our highest-rated small cars, and a 2015 Best Car To Buy Nominee.

The redesigned 2015 Fit hits all of those marks even more solidly this time; and it ramps up its act in some ways where it fell short before. For 2015, Honda hasn't strayed far from the packaging brilliance of those earlier models, but it's aimed at giving this model more value for the money, and making it a little smoother and more easygoing to drive.

Honda has also applied its ‘man maximum, machine minimum’ mantra that it’s been systematically working into all of their mainstream products, we can’t think of a better recipient of this kind of rethink than the Honda Fit. Sure enough, the small wonder of the market now has even more usable passenger space—especially in the back seat—despite being 1.6 incher shorter than before. And the Magic Seat arrangement, which has always been a game-changer, with its multiple modes of rear-seat folding, including a super-low, flat cargo area, is just as useful as ever.

Its fuel economy is better, too, and with EPA ratings up to 33 mpg city, 41 highway, this tall hatchback’s figures are no longer shamed by some rivals (and Honda’s own Civic).

The exterior hasn’t been neglected, either, and we think the Fit is a better-looking car from the outside. It sheds the mini-minivan-like look that its predecessor could have from some angles, and the combination of deep side sculpting, the arc of the roofline, and the blacked-out hatch design and front-end details really altogether make this design pop.

Honda has given its 1.5-liter four in the Fit direct injection, and it mates well with the five-speed manual, or with the continuously automatic transmission (CVT). The structure, suspension, and chassis have seen a thorough rethink, with new geometry and completely new tuning, and it adds up to something that’s safer, stable, and more comfortable.

That said, the 2015 Honda Fit isn’t perfect. One thing is that it’s lacking some of the well-tuned, finessed character that the previous Fit wore on its sleeve—and the exuberance possessed by the generation before it, in a different sort of way—have both come to pass. If it’s paving the way for a more focused Fit Sport or Fit Si, it’s not here yet.

Other issues are that, for all the innovation in cargo flexibility and back-seat comfort, the Fit’s new thinner front seats and different seating position simply aren’t as comforable. The dash has become a little more cluttered, as we see it, and some cool details from the outgoing car, like the dual glovebox, are gone.

On the other hand, this Fit feels especially ambitious this time around. It offers leather seats, and a navigation system that looks every bit as good as the one offered in the Accord (we think it’s better, actually, as you lose the confusing dual-screen setup). The current Fit isn’t the sportiest car in its class (the Ford Fiesta is more enjoyable for that, even in base form); but it hits the bullseye on features—with no significant hike in prices. The value of our fully loaded test car, at $21,560, was undeniably strong.

By the way, that’s all possible, in part, because this Fit is built in Mexico, at a completely new plant that will also build the upcoming, Fit-based HR-V subcompact crossover.

In recent years, the Fit has been the beacon of hope—a reminder that Honda hasn’t completely lost sight of what it does so well, which is to produce a car that was as exceptionally fun-to-drive as it was well-packaged. Part of the overall brilliance of the Fit has always been in how it stands apart from other subcompacts. This new model clearly is positioned nearer to the rest of its peer set—so as not to be dismissed in comparison shopping, if at the cost of a little soul. In this case, that’s just fine, and it remains our top-rated model in its class, and one of the best cars to buy.

Read our full review of the 2015 Honda Fit, and don't forget to vote below on which model you think should win our Best Car To Buy award. We'll bring you the winner on November 10.

This year there are 11 nominees ranging from family sedans, crossovers, a pickup truck, and even ... in The Car Connection Polls on LockerDome