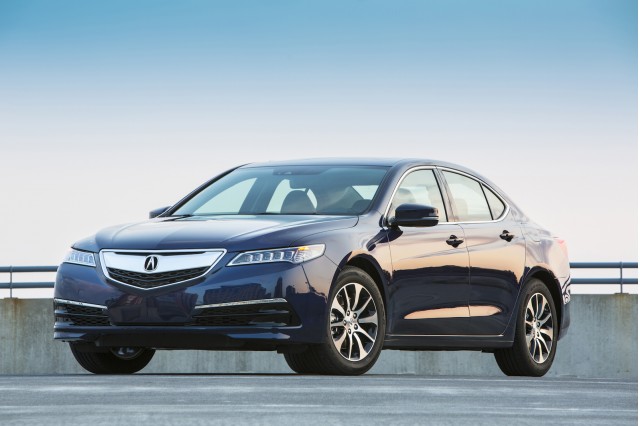 Acura has streamlined its sedan lineup this year, replacing both the TSX and TL with the new TLX. And while we’re especially sad to see the TSX (and its Sport Wagon variant) go, the 2015 Acura TLX is a better car in every way—one that’s a nominee for our 2015 Best Car To Buy award.

There’s a lot to love from the driver’s seat in the TLX. It’s readily apparent that Acura has hit the mark on a lean, focused personality, and on engineering that really works—resulting in a pleasant-driving car most of the time, yet one that’s surprisingly edgy and willing to satisfy any sport-sedan cravings when you have them.

This past week, when we really put our favorite TLX, the four-cylinder model, through the paces with some spirited drives up familiar Malibu canyon roads, we found that it exceeded our collective expectations.

As we point out in our full review of the 2015 Acura TLX, the 2.4-liter four-cylinder engine isn’t massively powerful, but it sure is willing, and it sounds great and always feels on top of its game in combination with the new eight-speed dual-clutch transmission. Acura added a torque converter here provide a smooth launch and damp some of the shift shock of this design and it works—while the rest of the time providing sharp, well-coordinated shifts via the steering-wheel paddles.

The so-called Precision All-Wheel Steer (P-AWS) system brings back a familiar technology—four-wheel steering—and it’s a technology that really works in the light, front-wheel-drive TLX and its taut but somewhat forgiving suspension tune. Hurl the TLX into a tight corner a bit too fast and just when you expect the car to plow dangerously ahead, the rear end does a little magic sidestep, as it feels from the driver’s seat, with the net effect being that you stay in control—and the car feels more nimble to boot.

Several of our editors would have liked to see the TLX’s performance rating bumped up from the current ‘8’ to a ‘9’—simply because it proved such a hoot, so stable, so satisfying yet difficult to fluster. That applies only to the 2.4-liter (four-cylinder) model, as the V-6 TLX, despite its nine-speed automatic transmission and available all-wheel drive, feels noticeably more nose heavy—and heavier in general—which ultimately kept the ratings boost at bay.

The TLX does a lot of things that models in this class often miss. For instance, it’s very airy, spacious, and space-efficient; the seats and driving position are widely adjustable, even for the extremes; and even though this is a somewhat performance-oriented sedan, ride quality is great and road noise isn’t an issue.

What keeps the TLX from absolute greatness? It’s what you start noticing when you’re instead sitting in traffic, or sitting back-to-back with some other luxury sedans its size. The TLX’s exterior shape is a good step forward, but its cabin feels anonymous and it doesn’t make a strong enough good first impression. Even within Acura’s own fold, there are some signs to us that the brand still isn’t offering up its best game in terms of interior materials and cabin ambience; we’d venture that even the top-of-the-line Accord Touring offers as much eye-catching luxury and detailing.

One thing Acura’s really ramped up with the TLX is something we pay special attention to at The Car Connection—and that’s value. While the TLX earns mostly ‘8’ out of ‘10’ scores in our Overall Review breakdown, it’s a solid ‘9’ in features. For the money—$31,890 to start—you get a great standard set of features; and those with an eye for more technology or luxury will appreciate the bundles Acura has put together in the form of the Technology and Advance packages that bring many active-safety extras.

In all, the Acura TLX feels like a throwback, in a mostly good way, to a time when Acura meant light, lean, and refined, yet well-designed. The brand may still be struggling to find its raison d'être, but the TLX is a (four-wheel) turn in the right direction.

Keep up with our nominee posts this week and next, and don’t forget to check in November 10 for our 2015 Best Car To Buy winner.

This year there are 11 nominees ranging from family sedans, crossovers, a pickup truck, and even ... in The Car Connection Polls on LockerDome