2016 Volvo XC90: Tablet-Like Sensus Is The Future Of Infotainment 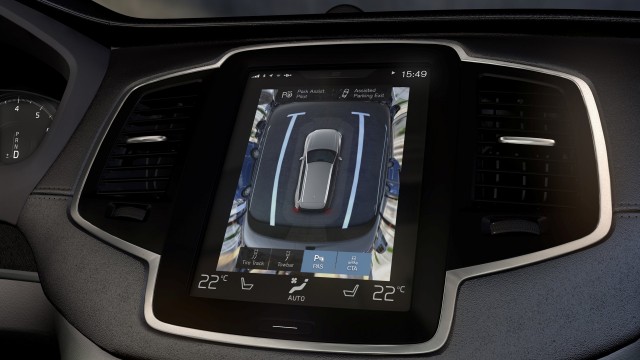 Is it any surprise that we're all very visual when it comes to staying in touch in our vehicles? What most drivers are accustomed to seeing, almost constantly, are tiled, list-style interfaces on phones and tablets. And so it makes a whole lot of sense that Volvo is going with what drivers know: a tablet-like, vertically oriented touch screen, for its all-new generation of Sensus infotainment in the 2016 Volvo XC90.

And based on a very limited sample of this system, the process of glancing over to a symbolically simple menu, from which you can select (or scroll) with a quick tap of the finger (or flick of the hand), can feel a lot less distracting than hunting through menus with a twist controller, or stumbling through voice menus that never quite deliver what they're supposed to.

Voice controls, the much-maligned and potentially quite distracting feature that some automakers have focused so much on have been given far too much of a primary role in some systems. The XC90 will have voice controls, but it won't be reliant on them.

In our first experiences with Sensus—sitting inside a 2016 XC90 at the vehicle's premiere, and sampling some of its abilities on a stand-up demonstration screen—we're almost ready to call this the best infotainment system yet. With native support for Apple CarPlay, support for Pandora and Spotify, and about 80,000 Internet radio stations at hand, the system should provide plenty of audio possibilities. Meanwhile beautiful navigation maps from Nokia can be pinched, expanded, and even rotated, just as in a tablet, and phone and messaging tiles on the main screen will expand to show new and recent messages.

The important part, through it all, is that a home menu with a series of tiles gives you only a summary of what's available on the home screen. Flip your hand to the side—even with gloves, thanks to additional infrared technology—and you can toggle in-depth views for each of the main functions (navigation, sound, phone, and messaging). Maps give you more of a view of the road ahead, thanks to the vertical orientation. And the system had no noticeable latency (the time from which you select a command and it's executed, or type a letter and it appears), by the way.

According to Martin Kristensson, Volvo's director of connectivity strategy, the system was conceived to offer the same processing performance as the iPad3, except with five times the graphics performance. It's been engineered for lag-free operation through years of updates. And while started on Windows for Automotive building blocks, it's different enough that it can be called an entirely proprietary system.

Volvo is considering offering a toolkit, but as of yet all apps have been developed by Volvo (some with partners). There will be an app 'store' (although with no charges) for the system, all with approved apps. And cloud solutions for updating and app data will be provided by Ericsson.

“It's about creating a user-interface that works in this context—of driving—and we're experts in that,” said Kristensson.

For a few years, two different Sensus systems in Volvos

And to clear up some ambiguity, Volvo is introducing two different new infotainment systems over this year and next. First, there's the new Sensus Connect system that's already at dealerships in the so-called '2015.5' models of the S60, V60, XC60, XC70, and S80.

While the interface and hardware for Sensus Connect—with a twist-and-push controller, steering-wheel toggle, and modest voice controls, looks much the same as the Sensus system that Volvo has been installing in its vehicles now for years, this new system includes available Volvo On Call services, to easily create a wireless hotspot, or to use—via a paired smartphone—local search or send-to-car destination features for the navigation system.

Additionally, with these new systems, the much-loved (albeit almost ridiculously bass-heavy) Dynaudio systems have been dropped, in favor of Harmon Kardon audio, which we haven't yet fully put to the test.

Then for 2016, the only model that was left off that last list, the XC90, gets that new, portrait-layout, fully capacitive version of Sensus; it's on the way in the 2016 Volvo XC90 that will start reaching U.S. dealerships next spring, while the other models in Volvo's lineup will be getting it as they're fully redesigned.