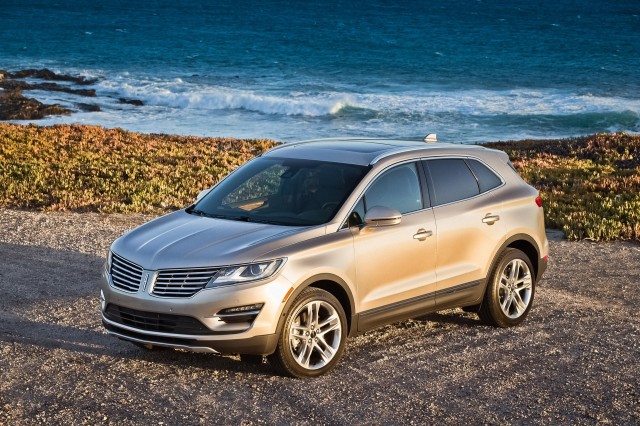 The federal government has crash-tested a 2015 Lincoln MKC, and with an Overall Rating at four stars, the model ends up short of the top echelon for compact-crossover safety.

While the new 2015 MKC is closely related to the Ford Escape, its safety ratings won't directly carry over from the Escape, for several reasons. In addition to a lot more features and luxury inside, the MKC has entirely different sheetmetal, as well as a clamshell-design rear hatch with cut-lines further into the vehicle corners, for a cleaner rear styling statement overall. The MKC also weighs more than the Escape (the feds note that the tested MKC AWD tipped the scales at 4,013 pounds, versus 3,782 lb for the previous Ford Escape SE AWD that had been tested).

New Car Assessment Program (NCAP) federal side-impact tests for the MKC found an excellent five-star level of occupant protection, for both male-size driver and female-size rear occupants. Although the results include an accompanying note that the left rear passenger door unlatched and opened during the side impact test—something that would increase the likelihood of occupant ejection.

The relatively new federal side pole test, which simulates the side impact with a narrow, fixed object like a utility pole or tree, also returned an excellent five-star rating for the MKC.

Frontal impact tests conducted by the federal government don't paint the MKC in such top-tier position, however; like the Escape, it achieves four stars in that category.

Not a complete picture yet—but some concern in Escape results

The Insurance Institute for Highway Safety (IIHS), the other major U.S. safety authority that crash-tests vehicles, hasn't yet tested the MKC—although the 2014 Ford Escape did earn a worrisome 'poor' rating in that agency's small overlap front test.

The Mazda CX-5 and Subaru Forester are both models that manage a top five-star overall rating from the federal government, as well as Top Safety Pick+ status from the IIHS.

Active-safety features are definitely a step up in the MKC, whether compared to the Escape, or to most other premium-brand compact crossovers. With an available Technology Package, you can add adaptive cruise control, active park assist, a lane-keeping system, and forward sensing to the MKC's feature set, and on top MKC Reserve models you get a Blind Spot Information System (BLIS) with cross-traffic assist—a real asset when backing out of a driveway, or from a parking spot in a congested area.