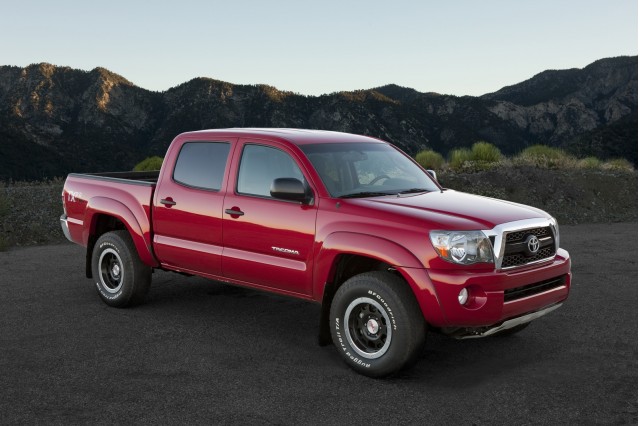 Toyota is recalling its Tacoma pickup from model years 2005 to 2011. According to the New York Times, the recall stems from a potential flaw in the truck's suspension, which could cause a leak in the fuel tank or damage the brake line.

The problem is a leaf spring located toward the rear of the truck, which could corrode over time. If the corrosion is severe enough, the spring could make contact with the vehicle's gas tank, eventually causing a fuel leak and increasing the risk of a fire. The spring might also damage a brake line, reducing or eliminating a driver's ability to stop the truck.

Toyota says that it knows of no accidents or injuries linked to the problem. However, at least 24 complaints have been filed with the National Highway Traffic Safety Administration since 2011. At least one of those complaints details complete loss of braking function.

The Times says that the recall affects roughly 790,000 vehicles, 690,000 of which are registered in the U.S. Unlike most recalls stemming from corrosion -- which are often limited in scope to northern states that use salts to de-ice roadways -- the Tacoma recall affects vehicles from every corner of the U.S.

READ: Iowa Shakes Fist, Tells Tesla To Get Off Its Property

Toyota hasn't indicated when the recall will officially begin. In a press release, though, the automaker assures owners that they'll receive notification of the recall by mail and that all repairs will be carried out at no cost.

If you believe that you own one of the affected vehicles, we encourage you to visit Toyota's online recall center at www.Toyota.com/recall, where you can enter your truck's VIN and receive additional information. If you prefer, you can also call the Toyota Customer Experience Center at 800-331-4331.