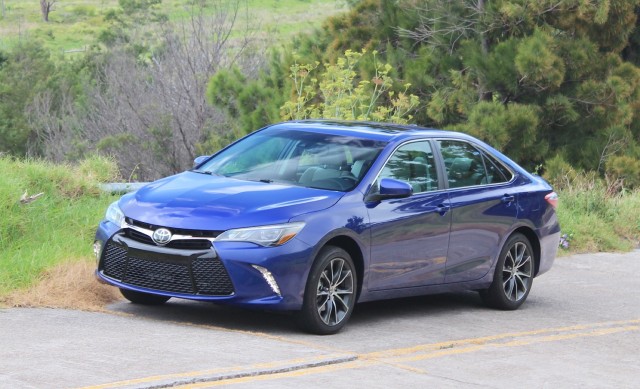 To paraphrase chief engineer Monte Kaehr, that was a message so commonly heard in focus groups with owners of current 2012- and 2013-model-year Camrys—when they were asked what single thing they’d like to change about their cars—that it rose far above other wishes.

DON'T MISS: Uh-Oh: Police Radar Could Soon Tell If You're Texting, Too

It wasn't anything that had to do with how the car rode or drove, and it's a warning bell for a model that's come to symbolize design androgyny. Even the Camry was too plain.

And really, it’s no surprise. When the current Camry emerged in 2011, as a 2012 model, it impressed as competent in every way, yet so conservatively redone that some might mistake it for its predecessor on the outside if they weren’t side by side. Meanwhile, with radical remakes of the Hyundai Sonata for the 2011 model year and the Ford Fusion for the 2013 model year—followed by evolutionary but significant redesigns of the Honda Accord and Nissan Altima that same model year—the Camry ended up looking a little...neglected.

Not just a quickie refresh

Because of that, Toyota looked at doing a more aggressive mid-cycle refresh than customary—within a company that's used to lock-step product cadences. Beyond just the usual headlights-and-taillamps, new-gauge-faces, new-wheels quickie refresh that mainstream cars often get halfway through their five or six year life cycles, the 2015 Camry has some serious toning and body sculpting—with entirely new sheetmetal that we dare say has picked up a trick or two from the Corolla. All but the roof has been redone, Toyota boasts.

Its mid-size mainstay has hardly been transformed (to use a word that’s overused to the point of meaninglessness in product presentations), and it's hardly bold (another one that we're desensitized to) but it does feel like the Camry has a new kind of flair that works well inside and out. It still looks like a Camry, just one that has a little more pizzazz, probably in a way that the current generation probably should have all along.

It has way more composure and control, too, as we found out. Nowhere was that better underscored than where our drive route—on the Big Island of Hawaii, took us on a small backroad that was actually quite well surfaced on an inch-by-inch basis but 'violently heaving,' looking at it a few feet at a time. Taking it at 50 or 55 mph (we would have slowed to about 30 in a pickup, or even slower in a stiff-riding roadster), the cushiest Camry in the lineup, the XLE V-6, soaked the harsh undulations up and—even more impressive—didn't wallow or make us seasick on the rebound.

And that's the point of a lot of engineering work put into this model. The 2015 Camry has far better ride and handling qualities, thanks to a new digressive damper calibration and new springs. Steering and stability control has been recalibrated. And even the brakes now don't have the nothing-then-everything mushiness that we've been knocking for years. This Camry is comfort-oriented, but it steers well, handles reasonably well, rides very well, and feels composed in nearly everything that you can give it. And with the gutsy, smooth 268-hp, 3.5-liter V-6, it's sure of itself on just about any grade or passing situation, too.

What we felt was the result of some serious engineering work on the Camry as well—again, not your typical mid-cycle refresh. After the team realized the scope of how many pieces they were changing for the design rework, then the drive behind the effort, according to Kaehr, changed to: “What can we do on the engineering side to make it better?”

CHECK OUT: 2015 North American Car And Truck/SUV Of The Year: Short List Announced

Those suspension changes were only the tip of it. Toyota added 22 new welds to the cowl area of the Camry for more torsional rigidity, redid some of the aerodynamics in the upper cowl area, moved the side mirrors back, and added about 30 percent more noise insulation—including more underfloor padding and an acoustic windshield.

While welds don't add weight, sound insulation and increased equipment does, and despite some weight-saving measures here and there the 2015 Camry models are up 50 to 65 pounds above a comparable 2014 trim level. It's not at all portly, though; the fully kitted-out XLE V-6 is still under 3,500 pounds, and the base LE four-cylinder still weighs in at 3,240—in the same ballpark as a base Mazda6 or Honda Accord.

A dose of Avalon makes a better Camry

Essentially the Camry has been given a dose of what Toyota gave the Avalon in that model's complete redesign a couple of years ago, and it shows in the V-6. But the Camry V-6 and Avalon are so close in pricing, and the Camry V-6 makes up less than 10 percent of sales. More than four out of five Camry models are sold with the base four-cylinder engine.

Yet as we headed out in a four-cylinder Camry, in the sporty and luxurious new XSE trim, we realized that the one area that Toyota didn't pay any attention to—powertrain—is what, in some respects, holds this car back from feeling closer to class-leading.

There's really no way to sugar-coat this one: The 178-horsepower, 2.5-liter four-cylinder engine that felt perfectly adequate and agreeable a few years ago is now completely outclassed and outmoded, in performance and fuel economy, by newer engines in nearly all of its competitors—including Accord, Fusion, Malibu, Passat. Most of those other engines, with direct injection and in some cases turbocharging, manage to deliver seat-of-the-pants torque that you can feel in the lower end of the rev band, without being any less frugal. And they're what make models like the Mazda6 and Accord feel particularly perky.

Toyota did well in holding onto its six-speed automatic transmissions; in both engines, the conventional auto box serves the Camry well—although the middle ratios felt a bit tall.

And based on what we observed, the V-6 models will get nearly the gas mileage of four-cylinder models. Over a 45-mile loop in the XLE four-cylinder (starting and ending around sea level), the trip odometer indicated an average of about 29 mpg; but then in a 65-mile loop in an XSE V-6, we saw 27 mpg. EPA ratings stand at 25 mpg city 35 highway with the four, or 21/31 with the V-6.

In our opinion, if you like the V-6, you might as well look at an Avalon; and if you like the Camry for frugal, comfortable motoring, there's a clear winner here: the Camry Hybrid. With it, you get EPA ratings as high as 43 mpg city, 39 highway; and it's even available in sporty SE trim, with those better seats, the sport-tuned suspension, and more attractive (as we see it) materials. There's not much of a sacrifice in packaging (just a little bit of trunk space), and it functionally feels perkier than the base four—because you get a rush of accompanying torque from the electric motor system right away. And in a short loop, driving the Hybrid hard, we still managed more than 32 mpg.

Of course, if what's under the hood really doesn't matter, and you don't mind that other models might feel quicker with their base engines, you'll probably be plenty happy with the base engine. The Camry continues to do well what this generation nailed from the start, and what still really matters to a certain portion of mid-size sedan shoppers: to accommodate four adults (or even five in a pinch) comfortably.

Some very good changes inside, where it counts

The new infotainment systems in the 2015 Camry are impressive, too—especially considering you get the 6.1-inch touch-screen system even in the base LE. And they work, without the now almost expected lag and latency, and with intuitive menus. We also like the Camry's sense of elegance in the new instrument-panel look (in all but the LE, where it's a little bleaker) and soft-touch materials, combined with the classy yet utilitarian layout of the dash and its oversize buttons and knobs. Yes, it reminded us of Jitterbug phone commercials at times, but hey, in a car it's what you need.

And that returns to the point of why you buy a Camry—because it's what you need. But with this model's new attitude (it is indeed more exciting), we think a lot more families that bought one out of necessity and economics are going to be showing off their new Camry with pride, too.