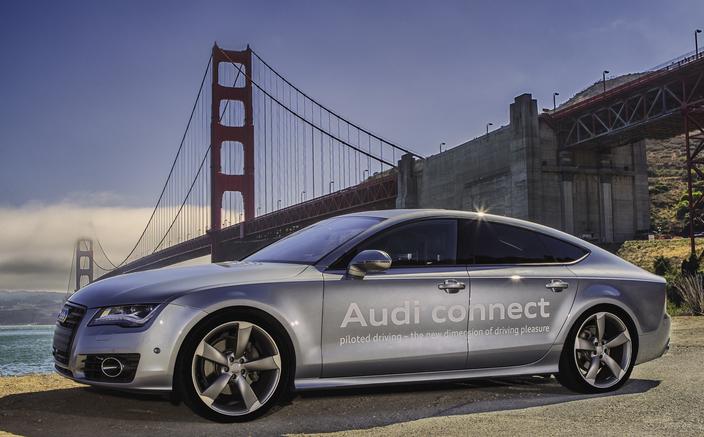 Just one week after Audi announced plans to offer self-driving vehicles to the public, the company now says that it has received California's first permit to operate autonomous cars on public roads.

California's new rules require autonomous car testers to maintain at least $5 million worth of insurance or surety bonds per vehicle. They also require that at least one company-designated operator be onboard those vehicles at all times. And, as we mentioned last month, the cars in the test fleet need to have steering wheels and brakes so that operators can take "immediate physical control" of the vehicles if necessary.

If you happen to live in California, it's possible that you'll see Audi's antenna-laden "Shelley" roaming the roads, but you're more likely to spot the souped-up A7 pictured above, which is dubbed the "A7 Traffic Jam Pilot". It doesn't deliver a complete, door-to-door, autonomous driving experience -- at least not yet -- but it can take over during slow, bumper-to-bumper commutes below 37 mph. (It might not sound like a big deal, but that kind of traffic is notorious for creating fender-benders and subsequently snarling traffic.)

As exciting as all this is, Audi isn't limited to California's highways and byways. It was also the first automaker to score a license for autonomous vehicles in Nevada -- though it's worth noting that the very first license went to non-automaker Google.

For more on this story, including a video of an Audi operating autonomously in traffic, check out our colleagues at Motor Authority.