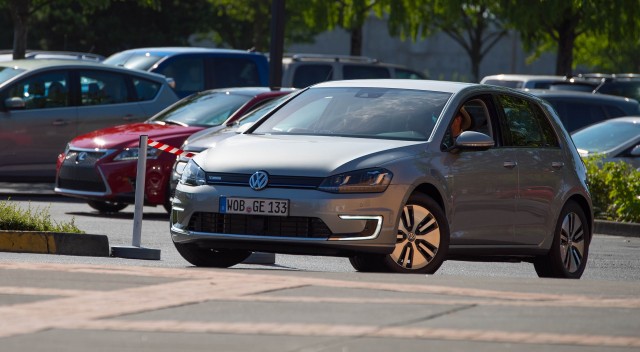 Would you pay twice as much for your vehicle, initially, to go electric?

Of course, you should keep in mind that a federal tax credit of $7,500 will apply to the e-Golf, lowering its effective price (provided you qualify for the credit) to $28,765. Additional federal or state money could reduce that amount even further. And in lieu of getting that credit yourself, Volkswagen could be offering some attractive lease deals.

READ: Ford Is Developing A New Line Of Hybrids To Take On The Toyota Prius

e-Golf only arrives loaded with features—and a premium price

Fast-charge capability is also included in all U.S. e-Golf models. That allows this model to be charged to 80 percent in less than a half an hour. VW hasn’t yet revealed an official EPA driving range for this model, but since its battery capacity, of 24.2 kWh, is about the same as that of the Nissan Leaf, we expect the official numbers to land around 80 miles or higher.

Perhaps more appropriately, the e-Golf needs to be matched up against the Nissan Leaf, as well as the Ford Focus and the upcoming Kia Soul EV. This is, of course, a question that Ford has been asking already with its Focus Electric—a model that has been a relatively slow seller, although arguably one that has been given short shrift in marketing and promotion under Ford’s Energi plug-in-hybrid models.

All the Golf versatility and packaging goodness preserved 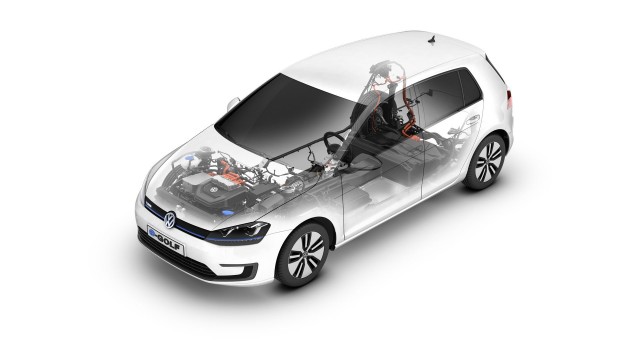 The e-Golf has one big advantage over the Focus Electric, too: Its cargo floor is largely unaffected by the battery, as VW’s modular transverse matrix (MQB) platform was conceived from the start to allow a place for battery packs underneath.

This model might stand only in niche appeal next to the brand's especially strong, attractively priced Golf TDI models; but the e-Golf shows promise against those other all-electric hatchbacks. We’ve already driven the 2015 Volkswagen e-Golf and found it to be considerably more refined, quiet, and comfortable than some other electric models on the market. We expect to get some extended time with one later this fall.

VW says that the e-Golf will go on sale “in participating dealerships in select states”—meaning that it won’t be available everywhere, like the Leaf. If your dealership is among those participating, expect the e-Golf to start arriving in November.