2015 Dodge Charger SRT Hellcat: The Fastest Sedan In The World 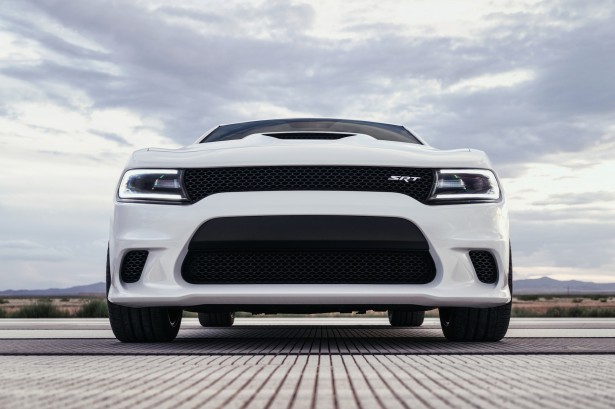 Is the 2015 Dodge Charger Hellcat faster than any normal production sedan—even with a Mercedes AMG, BMW M, or Audi RS badge?

That's what Chrysler has now revealed, with this much-anticipated super-sedan (or muscle-sedan, depending on how you see it). It's not just the fastest, but the quickest and most powerful.

And perhaps unexpectedly, four doors are faster than two—at least here. The Charger SRT Hellcat has the same 707-horsepower supercharged 6.2-liter V-8 as the Challenger SRT Hellcat we drove this past month. But it accelerates even quicker (0 to 60 mph in just 3.7 seconds, officially). And its top speed is a holy-rolling 204 mph—significantly higher than the Challenger thanks to its better 0.35 coefficient of drag.

With a blast of official details on this new performance sedan, the automaker gave the Charger Hellcat an official debut at a celebration surrounding the Woodward Dream Cruise—an annual Detroit-area tradition especially celebrating vehicles from the muscle-car era.

Different directions for Charger and Challenger, but both 707 hp

The two vehicles will definitely play to different crowds, as their quite different exterior appearances suggest. It's a difference that's far more pronounced than waging coupe versus sedan. While the Challenger became even more retro with its latest refresh, the 2015 Dodge Charger definitely ditched most of its remaining retro nods (although it still claims to be inspired by the 1969 model) for a more modern look, with a more blunt, 'cut-off' front and rear appearance, plus cleaner, less angular, and more flowing design details at the rear.

Riding on seven-spoke 'Slingshot' forged alloy wheels, in Matte Black or Brass Monkey (dark bronze) finishes, and shod with 275/40ZR20 Pirelli P Zero tires, the Charger Hellcat has the tires to match its capabilities—with a Y-Plus speed rating. And those huge six-piston, 15.4-inch front disc brakes in the Charger Hellcat are mammoth, and quite necessary, given this car's capabilities.

Just as in the Challenger Hellcat, the Charger Hellcat will feature a new Drive Modes feature, allowing Sport, Track, Default, and Eco settings that together affect transmission shift points, paddle-shifter behavior, traction controls, and suspension. They can also limit power; the Charger Hellcat includes a red and a black keyfob—with the black one offering reduced engine output. There's also a Valet Mode.

A 900-watt, 18-speaker Harmon Kardon premium audio system will be standard on the Charger Hellcat, as well as the 8.4-inch Uconnect touch-screen media center, a flat-bottom heated steering wheel, heated-and-cooled front seats, and heated rear seats. Seats are also upgraded, with more cushioning and bolstering, and this model gets a special T-handle shifter.

The 2015 Challenger SRT Hellcat starts at $60,990. Although Dodge hasn't yet released pricing for the 2015 Charger SRT Hellcat, it adds up to what we think might be an even better performance bargain—a world-beating one.

Look for the Charger SRT Hellcat to reach dealerships in the first quarter of 2015.