2015 Cadillac Escalade Gets Quickest Refresh Ever, Plus $90,270 Platinum Edition 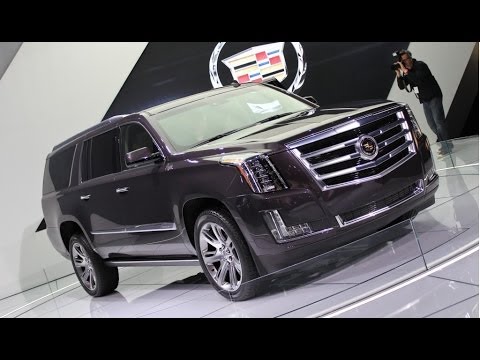 Before it's even a model year old, the Cadillac Escalade is getting more refined and more efficient, in what's one of the quickest upgrades seen in recent years.

The 2015 Escalade will swap out its existing six-speed automatic for a new eight-speed automatic by the fourth quarter of this year, only partly through its first model year since a thorough rework. When the eight-speed arrives, it'll send power either to the rear wheels or through a new four-wheel-drive system with a two-speed transfer case--versus the current all-wheel-drive setup.

The Escalade's 420-horsepower 6.2-liter V-8 engine remains unchanged. Fuel economy should go up, but there are no revised EPA figures available yet.

Along with the drivetrain hardware, the Escalade lineup also will add high-speed 4G LTE connectivity and a surround-view camera system. The new wreathless crest logo applied to the new Cadillac ATS and CTS will also be fitted to the Escalade's big grille. With all this gear added, the Escalade will get a $1,275 increase in its base price, bringing it to $73,965.

Finally, at the top of the range will be the new Platinum trim, from $90,270. It adds 22-inch wheels, more chrome exterior trim, a mesh grille, and more badging outside. Inside, the Platinum adds Nappa leather to the seats and leather trim to the dash and doors. A sueded headliner is matched to the leather.

Heated and cooled 18-way power front seats are standard, and include a massaging function on the driver’s seat. There are a number entertainment screens, too, and a cooled center console compartment to keep your drinks chilly. Finally, Escalade Platinum models also include premium floor mats and Platinum-branded door sill plates.