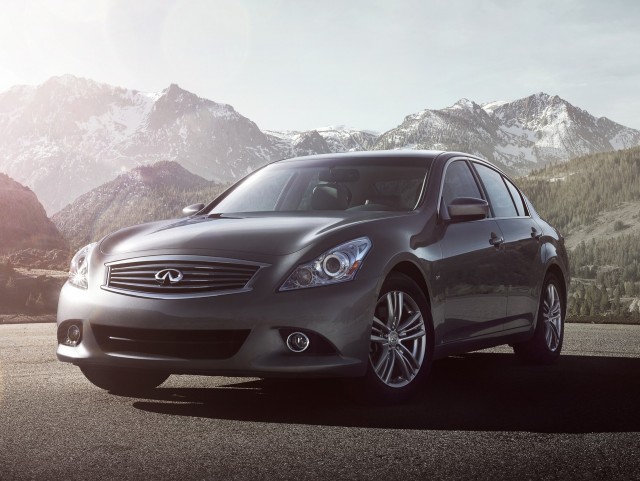 What used to be called the Infiniti G37 Sedan continued to be sold through the last model year, as a 2013 model, while the model that was to be its replacement was introduced as the 2014 Infiniti Q50, and as the former G37 Coupe was renamed the Q60. Now for 2015, the former G37 Sedan returns, continuing on as the Q40.

If you're a bit confused by this, you're not the only one. At present, Infiniti's consumer-facing site still lists the 2013 G37 Sedan as a possibility for 2013 but not 2014, and there's not yet any mention of the Q40, or much help in differentiating which is which.

Yet Infiniti has outlined the 2015 Q40 lineup. Just as with the previous G37, the Q40 will offer a choice between rear- and all-wheel-drive versions, with a 328-horsepower, 3.7-liter V-6 and a seven-speed automatic transmission. And it rides on an independent double-wishbone front suspension and multi-link rear setup.

In the past, we've found the handling and body control of this model to be absolutely top-notch, with perhaps the best-weighted, most communicative steering of any sport sedan in its class in recent memory—and that includes the new Q50. The only thing we didn't love as much about the Q40 née G37 was its cabin noise; the Q50 has made major improvements in that, and in offering advanced infotainment and a more refined cabin experience in general.

The Q40 will only be offered in four colors: Liquid Platinum, Graphite Shadow, Black Obsidian and Moonlight White.

Although we're still not completely clear on why there are two generations of mid-size sport sedans sold at the Infiniti dealership in 2015, we'll venture a guess that there are going to be some very attractive lease deals on the Q40. And if you're a driving enthusiast, there's still a lot to appreciate in this 'classic' model.