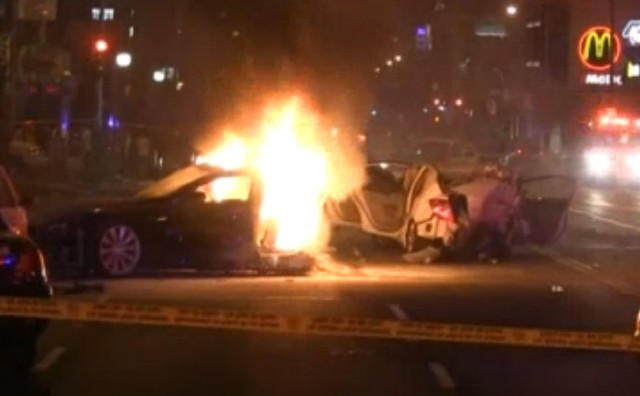 In the early hours of July 4, Joshua Michael Flot stole a Tesla Model S from the automaker's service center in west Los Angeles, California. According to Bloomberg, he then led authorities on a high-speed chase and was doing a good job of outrunning them.

Then, Flot reached La Brea Avenue in West Hollywood, where he hit two vehicles and a steel pole. The Model S split in half and caught fire. Flot was taken to a hospital, and on July 7, he succumbed to his injuries. Police announced Flot's death yesterday, after notifying the man's relatives.

Ordinarily, this wouldn't be much of a news story. After all, high-speed chases and traffic fatalities are, for better or worse, fairly common in the U.S.

But according to Tesla spokesperson Simon Sproule, Flot may be the first person to die while driving the all-electric Model S.

Tesla was the subject of much discussion and an investigation by the National Highway Traffic Safety Administration last year after three Model S vehicles caught fire. Ultimately, Tesla determined that the fires were caused by roadway debris, which damaged the vehicles' battery packs, so the company installed titanium shielding under the vehicle to protect batteries from potential breaches. That satisfied NHTSA, case closed.

Will this month's fiery incident rekindle the safety agency's interest? Not likely. Adrian Lund from the Insurance Institute for Highway Safety says that cars don't have to be moving too fast to suffer significant damage from obstacles like steel poles. Despite the Model S' excellent safety rating, it's not surprising that the Model S suffered extreme damage in this case, given Flot's high rate of speed.

Tesla is cooperating with an investigation of the collision, but maintains that its cars are extremely safe. According to the company, the Model S has just a one in 8,000 chance of catching fire during collisions -- roughly five times lower than the risk in gas-powered vehicles.

For reference, this may be the first instance of a Model S driver dying during a crash, but the Model S has been involved in other fatal accidents. In fact, later on July 4, not far from Los Angeles, three passengers in a Toyota Corolla were killed after being rear-ended by a Tesla Model S. The Tesla driver suffered only minor injuries.