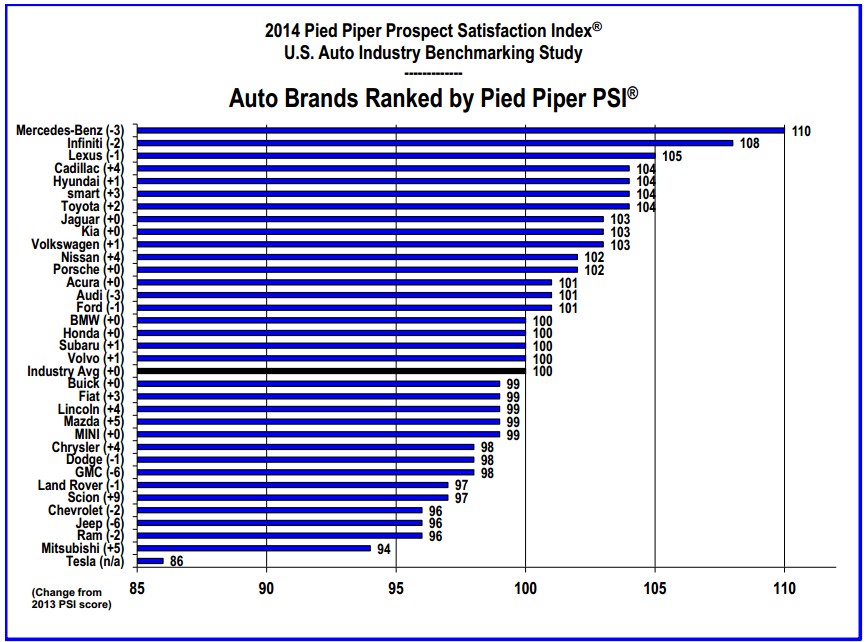 Early July means different things to different people. For you, it probably means a bit of vacation, maybe some fireworks. For us, it means the release of another satisfaction study from research firm Pied Piper.

As in previous years, Pied Piper used a small army of mystery shoppers to gather data on dealerships. Between July 2013 and June 2014, 5,671 of those folks visited dealerships across the US. At each stop, shoppers secretly scored salespeople on their courteousness, their thoroughness, and their ability to move consumers through the process of browsing, testing, and ultimately, buying a car.

As in previous years, luxury brands came out on top of this year's Prospect Satisfaction Index. That's not too surprising: when you're asking consumers to shell out top dollar for a new ride, you're going to be more inclined to treat them with kid gloves.

Of the 34 brands included on the study, Mercedes-Benz ranked #1, earning 110 points across the roughly 60 criteria that Pied Piper employs. Along with Jaguar and Lexus, Mercedes-Benz has ranked among the top ten brands for the past decade of this study.

Infiniti, Lexus, and Cadillac came in at #2, #3, and #4, respectively, followed by Hyundai, the highest-ranked mass-market automaker on this year's study. Smart, Toyota, Jaguar, Kia, and Volkswagen rounded out the top ten, all scoring above the industry average of 100 points.

At the bottom of the list, we find many more Detroit brands. Chrysler came in at #25 -- though it came in just two points below the industry average, at 98. Chrysler was followed in the rankings by Dodge, GMC, Land Rover, Scion, Chevrolet, Jeep, Ram, and Mitsubishi. At the very bottom was Tesla, with a score of 86 points.

This was Tesla's first year to be included in the survey, and from where we sit, its poor showing is less a reflection of Tesla salesmanship and more due to the inability of Pied Piper's survey to accommodate Tesla's unique sales model.

For example, Pied Piper notes that Tesla sales staff were among the least likely to invite shoppers to sit down at a desk (an important move signalling a shift from browsing to serious discussion about buying). Tesla staff were also dinged for not offering test drives and for not discussing financing options.

But of course, in many cases, Tesla staff weren't able to have those sorts of discussions. Because Tesla is trying to stay on the good side of dozens of different state franchise laws, the staff at the company's galleries can't always talk directly about purchasing particulars, and many -- if not most -- can't offer test drives.

If Pied Piper continues to include Tesla in its rankings, let's hope that it takes such factors into consideration. Unless, of course, Tesla manages to have state franchise laws overturned, putting it on equal footing with dealerships associated with other brands Which might be the best thing of all.

[F]or our 2014 study we shopped every one of Tesla’s dealerships nationwide that could sell a car on the spot.  We did not shop any of their locations where state law prohibited such activities.

What we found at the Tesla dealerships was quite a lot of variation in the sales approach their salespeople followed.  Some were superb by any measure, while others did very little to help car shoppers become car owners.  At the very best performing auto brands, there is much more consistency from dealership to dealership.

In a follow-up email, he elaborated a bit more:

Tesla had 49 locations that can sell cars (according to their web site) and we shopped every one of them.

From our perspective, if we had found that Tesla dealerships all followed the same steps to sell—even if different from what we normally find—we would have been able to conclude that they were following the approach they had purposefully chosen to sell.  That is not what we found.  We found much more variation in sales steps than for any other brand.  My guess is that this is from being a new network more so than selling in a “new” way. [Emphasis ours]

To put this variation into numbers, one out of four Tesla dealerships performed well; scoring above the Mercedes-Benz PSI average of 110, but in contrast, one half of the Tesla dealerships had a PSI score below 60.

To be clear there are Tesla dealerships with salespeople who are brilliant; doing all they can to be helpful in turning a new Tesla shopper into a happy Tesla owner.  On the other hand though, there are many more Tesla dealerships with salespeople who know their product inside and out, but don’t bother to figure out what’s important to their shoppers, or proactively take steps to help them become owners.   Here’s a quote from one of the dealer visits, “The principal focus of the discussion was the car and its functions and its technology.  This was it.  Nothing else.”

Years ago we came up with the term, “Museum Curator” as a description of salespeople who are friendly and knowledgeable, but do nothing to proactively help car-shoppers become car-owners.  In contrast, the very best salespeople are just as friendly and knowledgeable as the “museum curators,” but also get to know the needs of their customers and do all they can to be helpful in the customer’s effort to buy a car.  Tesla has many of these brilliant salespeople, just not nearly as many as at dealer networks for some other brands.