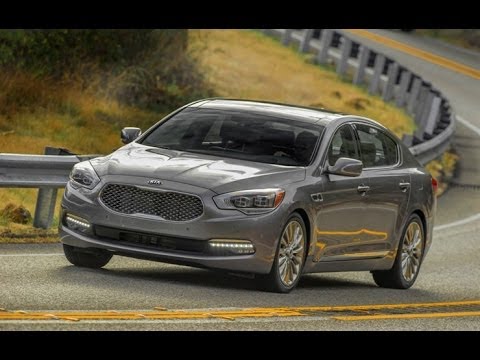 A few years ago, the idea of a luxury sedan from a Kia was, well, let’s say farfetched. Things have changed, and Kia’s now known for stylish, reliable vehicles that you want to be seen in.

But still, an expensive luxury sedan from the Korean brand is a new thing. Can the Kia K900 really compete with the likes of Lexus and Acura? Can it make the same leap as Hyundai?

The K900 stretches Kia’s current design themes over a much larger vehicle. The most distinctive part of the car is Kia’s signature grille and LED headlights. Otherwise, it's not very distinctive—and we could do without the fake side vents.

Inside the K900’s cockpit is comfortable and stylish. Most of the materials are soft-touch with luxury surfaces like wood and matte silver metal. There’s quite a bit of glossy black piano trim which we aren’t big fans of. We do like these buttons and knobs—basics that some of the competition has ditched.

Up front you’ll find adequate space, though it’s not expansive. In the rear seat, it’s more than spacious. The V-8 VIP models include adjustable seats with a recline feature, a limousine-like touch. Oh, and you can also reposition the front passenger seat from the control console built into the wide fold-down armrest, you know, so you have more room.

Under the hood of the K900 you’ll find either a 3.8-liter V-6 rated at 311 horsepower, or our car’s 5.0-liter V-8 rated at 420 horsepower. No matter which engine you choose power is sent to the rear wheels through an eight-speed automatic.

From behind the wheel the K900 performs adequately with the V-8 engine, though there is some throttle lag. It handles decently for a large sedan, but it definitely doesn’t feel smaller than it is from behind the wheel. To its credit, the big car does corner flat and it’s well-behaved even on cracked country roads.

The K900 is brand-new and hasn’t been crash tested yet, but Kia’s expecting it to do well. There are eight standard airbags along with the usual array of safety systems. Several electronic safety systems are available, such as adaptive cruise control, blind-spot monitors, and a surround-view camera.

The K900 starts from just under $60,000 and comes pretty well equipped with a 900-watt Lexicon audio system, LED headlights, and four heated seats. Load it up with the V-8 VIP package and you’ll be looking at about $65,000 with everything from a surround view monitor and adaptive cruise control to a 12.3-inch infotainment screen and head-up display.

So what’s the bottom line with the Kia K900? It reaches for the luxury stars—and grabs a little Lexus and old-school Cadillac while it’s at it.