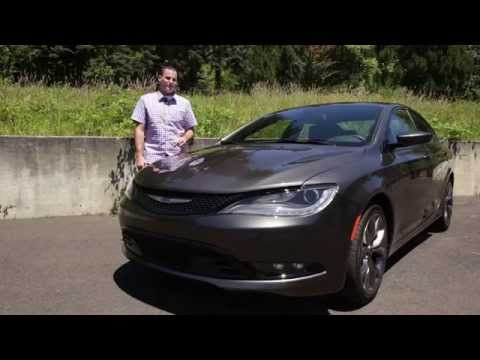 The Chrysler 200 used to be better known as America’s rental car. Can this brand-new version erase that memory and reset Chrysler’s image in mid-size family sedans?

The mid-size segment is full of great cars like the Ford Fusion, Mazda 6, and Nissan Altima. Like them, the Chrysler 200 puts a big bet on styling to win over shoppers. It’s attractive inside and out, and doesn’t shout out its family connection to the Dodge Dart. The Saab-like front end is a nice touch, and the gently sloped roofline is handsome—though we’ve seen it before on everything from the Audi A7 to the Ford Fusion to the Hyundai Genesis.

Inside, the 200’s dash is a real showpiece. It’s convincing in its quality, and the more expensive trims really put some of the competition to shame. The gauges and center display float together in a curved cut-out with soft-touch material everywhere. The transmission is controlled by this rotary knob, and there are big dials for the volume and fan, too.

It’s a pretty place to sit, but the 200 has one of the smaller cabins in the mid-size class. The front-seat space has good knee room, and it’s comfortable for six-foot drivers. These optional sport seats have nice bolstering to them.

The story is a little different here in the back seat. It’s really more ideal for small adults or teenagers. This roofline makes getting in and out a chore, and headroom will be limited for some. But it has a large trunk at 16 cubic feet, and the rear seats fold 60/40.

Under the hood of the Chrysler 200 you’ll find either a 2.4-liter four-cylinder rated at 184 horsepower, or a 3.6-liter V-6 rated at 295 horsepower. The four is pleasant as long as you get the acoustic-glass option to damp out some of its noise. The V-6 has some of the strongest acceleration in the segment, but it also has noticeable torque steer in front-wheel-drive versions; all-wheel drive is an option. A nine-speed automatic is standard on all models, and it’s good, even if it judders a shift here and there.

Predictable, unremarkable handling puts the 200 in the middle of its class, somewhere between the Altima and Fusion. It has a fairly calm ride and the steering is reasonably responsive.

Gas mileage is much more competitive in four-cylinders than with the V-6. The four gets up to 36 mpg highway. That drops to 32 mpg if you opt for the V-6. Add in all-wheel drive and you’ve just dropped to 29 mpg highway.

For safety, the 200 gets the usual airbags and stability control. There’s a package that gives you lane-departure warning, forward-collision warnings and autonomous braking, as well as adaptive cruise control. No crash tests have been run, but since it’s related to the Dodge Dart, we expect it to do well.

The Chrysler 200 starts at just over $22,000 and it’s competitively priced and equipped. Standard features include keyless entry, tilt/telescope steering wheel, overhead storage, and air-conditioning. Unfortunately you’ll have to order Bluetooth separately and the base LX model doesn’t offers a rearview camera. Load it up and you’ll be just under $35,000 with everything from touchscreen navigation and open-pore wood to all-wheel drive and LED fog lights.

So what’s the bottom line with the 2015 Chrysler 200? It can fetch a premium for its style and its horsepower—but rear-seat room and handling are better bargains elsewhere.