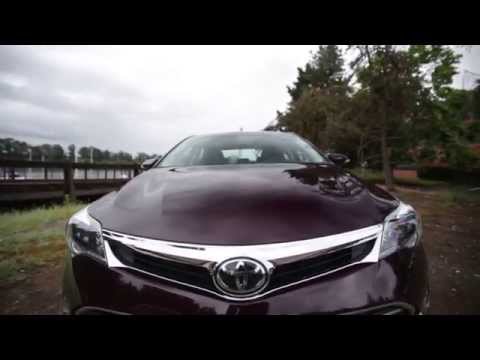 The Toyota Avalon has been accused by some of stepping into Buick’s old shoes—catering to the crowd shopping for their final car. But Toyota’s given this latest Avalon some ambition. They're calling it a flagship now.

Are interesting looks and advanced tech enough to fend off the competition such as the Chevrolet Impala and new Kia Cadenza?

Toyota’s really shaken up this car in terms of styling. The exterior lures you in with a flowing roofline and unexpected punch at the rear fenders.

The interior of the Avalon wants to be noticed, with this bank of flush-mounted, touch-sensitive switches. Look closely and the cabin materials are superb with nice matching grains and surfaces. It’s the swankiest Avalon ever.

Spending time in the Avalon won’t be a chore as it’s extremely roomy no matter where you’re sitting. The seats are comfortable, though these front ones could use a little more lateral support. These back seats don’t have a support issue. They’re among the best we’ve sampled in a larger sedan.

Trunk space is generous at 16 cubic feet on standard models. Opt for the hybrid model and the battery cuts into that slightly, taking it down to 14 cubic feet, but still not bad.

Under the hood you’ll find either our tester’s naturally aspirated 3.5-liter V-6 rated at 268 horsepower and 248 pound-feet of torque, or Toyota’s hybrid Synergy Drive system with a net of 200 horsepower from its combination of a four-cylinder engine, nickel-metal-hydride batteries, and two electric motors. Power is sent to the front wheels no matter which powertrain you choose as all-wheel drive isn’t available.

Fuel economy isn’t bad with a 31 mpg highway rating on the non-hybrid model, but frankly it’s the hybrid model that’ll grab your attention with a realistic rating of 40 mpg combined.

Behind the wheel of the Avalon is a rather shocking experience because it’s actually a quick, responsive car. It’s composed and far more refined than the outgoing model. We wouldn’t call it sporty, but it’s capable in a way the Avalon hasn’t been before.

The Avalon offers a strong list of safety features including rear side airbags and front knee airbags. Crash-test ratings have been almost perfect across the board, and a rear cross-traffic alert system helps detect vehicles as they approach from the side and behind the vehicle. Pretty slick stuff.

Starting from around $31,000 the Avalon comes pretty nicely equipped with leather-trimmed seats, a smart key system, and backup camera. Load it up like our Limited test model and you’ll be looking at about $42,000 with everything from radar adaptive cruise control and wireless phone charging capability, to a 7-inch touchscreen infotainment system with navigation and heated and cooled seats.

So what’s the bottom line with the 2014 Toyota Avalon? It’s far more youthful than it used to be, with a responsive feel and an excellent interior to go with its 40-mpg Hybrid version.