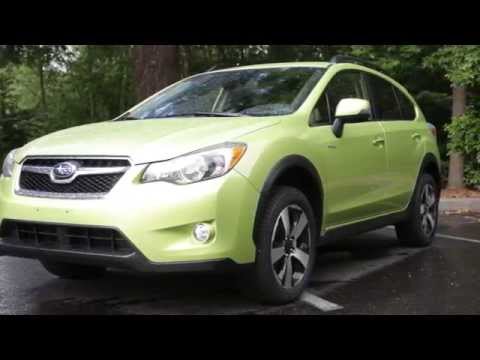 Subaru’s built its reputation as the king of all-wheel-drive wagons, but it hasn’t always been the king of fuel economy. That sticking point has led to the first Subaru gas-electric car, the 2014 XV Crosstrek Hybrid.

Under the hood of the XV Crosstrek Hybrid you’ll find a 10-kilowatt electric motor between a specially tuned version of Subaru’s 2.0-liter four-cylinder engine and a continuously variable transmission. You’ll find a 0.6-kilowatt-hour nickel-metal-hydride battery pack located under the cargo bay. This can both supplement engine output and restart the engine when it switches off at stops. That battery pack only takes up 1.7 cubic feet of cargo space.

So how does it drive? If you want to keep it in EV mode it takes a very, very light foot. This isn’t a hybrid system like those from Toyota, Ford, or Hyundai: their hybrids can move the car away from a stop on battery power alone.

The Crosstrek Hybrid also isn’t quite as smooth as the best hybrids, but it’s close. Blending engine power, motor torque, and transmission and braking all together is a tough task the first time out.  The Crosstrek has just a small shudder when the engine turns off.

The sum of all this is higher EPA fuel economy ratings--31 mpg combined, with a 29 mpg city and 33 mpg highway rating. In the real world outside of the EPA test lab, we’ve seen little improvement in fuel economy compared to the non-hybrid Crosstrek, though most of our driving has been on the highway.

Still, given the choice, we’d take the Crosstrek Hybrid. It drives better than the non-hybrid model. It’s quieter on the road thanks to improvements to suppress noise and vibration. It also has an upgraded front suspension.

And it doesn’t look much different from the standard car. From the outside, you’d be hard pressed to spot the differences between the Crosstrek and the hybrid. There are special lightweight 17-inch alloy wheels and automatic grille shutters, but that’s about it.

The interior of the XV Crosstrek Hybrid is mostly the same as the Impreza on which it’s based, too. There’s some new trim and these seats have a more rugged upholstery material. Everything here is straight forward and simple. We like it.

Four adults will fit comfortably in the XV Crosstrek Hybrid, though five will be a squeeze. The seating position is upright and the rear seats are contoured for adults. You can easily fold the rear seats 60/40 with the pull of a knob to increase cargo space.

The XV Crosstrek is an IIHS Top Safety Pick with top scores in all the tests, and the NHTSA gave it five stars, its highest rating. Outward visibility is good thanks to the low belt line.

At just under $26,000 the XV Crosstrek Hybrid comes well equipped with heated front seats, mirrors, and a deicer for the windshield wipers. A rearview camera and Bluetooth are also standard. Load it up with HD radio, leather, and navigation and you’ll be looking at about $30,000.

So what’s the bottom line with the 2014 Subaru XV Crosstrek Hybrid? It’s an equal-opportunity hatchback with an agility for Snow Belt commuters and outdoor adventurers alike.