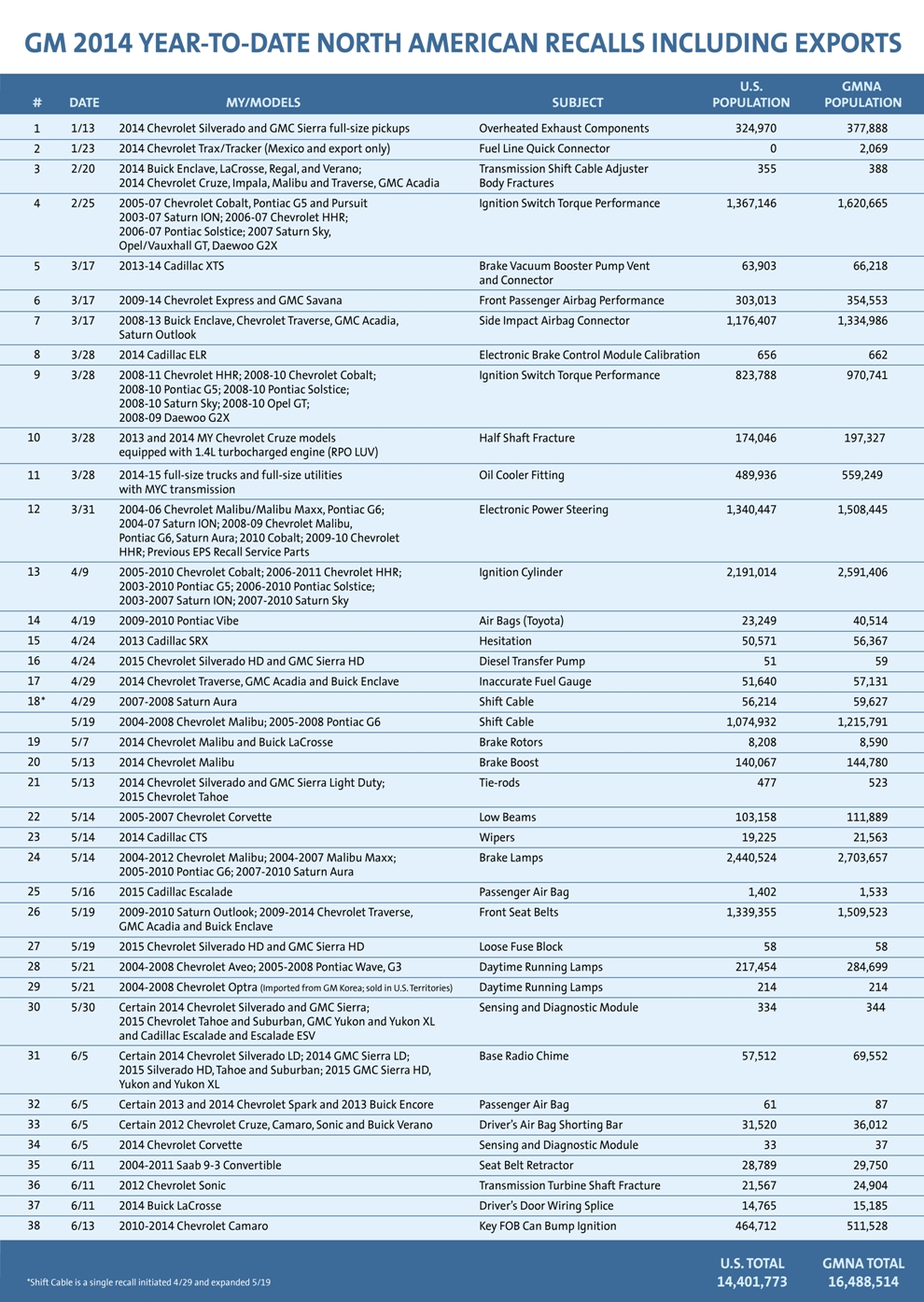 A running total of General Motors recalls as of June 13, 2014

General Motors is adding four more recalls to its already-long list of scheduled fixes. All four are for very different reasons, and most involve recent models, including the current-generation Chevrolet Camaro, which suffers from a problem similar to the one affecting "Switchgate" vehicles.

CHECK OUT: What Car Should You Really Drive?

According to a statement from GM, the Camaro's key can be knocked out of the "run" position if a driver's knee bumps the key fob. Should that happen, the vehicle will lose power, making it far more difficult to control and upping the possibility of an accident. GM knows of three crashes that have been linked to the problem, which resulted in a total of four injuries.

GM says that this flaw is unrelated to the ignition switch problem affecting many older GM models. However, the company notes that the "Switchgate" recall did lead to the discovery of the Camaro's problem: "The issue, which may primarily affect drivers sitting close to the [Camaro's] steering column, was discovered by GM during internal testing following the ignition switch recall earlier this year."

The Camaro's problem stems from the design of its key, which is hidden within the fob and revealed when the driver presses a button. To fix that, GM will update the key to a standard design, which will prevent the key slipping out of the "run" position if the fob is touched.

Of the total number of vehicles recalled, 464,712 are registered in the U.S.

GM says that in some 9-3 models, the cable that controls the automatic tensioning system for the driver’s seatbelt could break, which would prevent the belt from retracting properly. Should that happen, the seatbelt wouldn't protect the driver during a collision, increasing the risk of injury.

An identical recall was carried out in 2010 on the Saab 9-3 sedan. The convertible wasn't included because it uses different parts, but it has now become clear that the parts themselves weren't the whole problem.

This recall stems from a faulty transmission turbine shaft manufactured by one of GM's suppliers. In Spark vehicles that came equipped with six-speed automatic transmissions and 1.8-liter engines, the shaft may crack. GM explains:

"If this were to occur in first or second gear, the vehicle could not upshift into third through sixth gears. If the turbine shift fractured while in one of the higher gears, the vehicle would coast until it was moving slow enough to downshift into first or second gear. In both instances, a malfunction indicator lamp may illuminate. If driven in this condition for a long period of time, all forward gears may become inoperable. The engine would continue to run and all power accessories would function."

GM says that it knows of no crashes or injuries associated with the problem and says that dealers will replace the transmission turbine shaft, free of charge.

According to GM, a wiring splice located in the driver’s door may corrode and, ultimately, break. If that were to happen, it could send incorrect information, wreaking a good bit of havok by allowing the car's windows and sunroof to function when the vehicle is turned off. Since the wiring also affects the LaCrosse's door chime, it's possible that the chime may not sound if the driver's door is opened while the key is still in the ignition, which would increase the possibility of rollaway or theft.

GM says it knows of no accidents, injuries, or thefts associated with the problem. Dealers will inspect the wiring harness in the driver's door and replace the splice, if necessary.

GM hasn't indicated when it will begin each of these recalls in earnest. Given the intense public scrutiny focused on GM right now, though, we'd expect most of them to start soon (especially the Camaro recall, since it's superficially similar to GM's high-profile ignition switch problems).

For a complete rundown of every recall issued by GM since the beginning of the year, check the handy chart above.