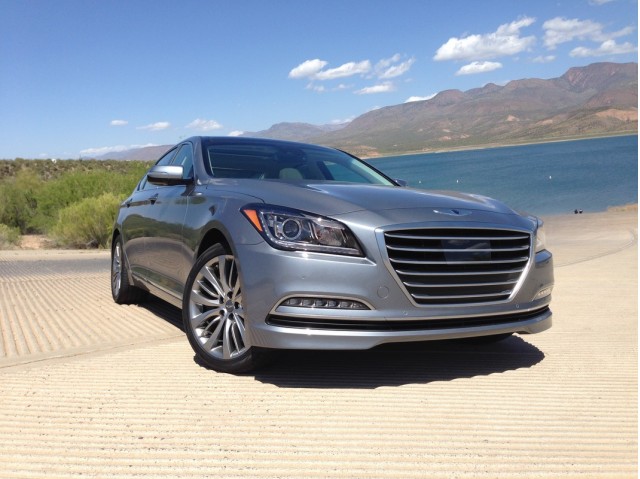 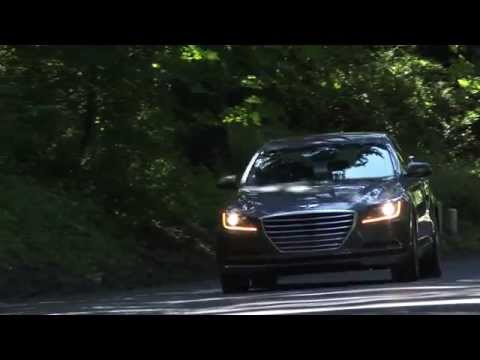 The Hyundai Genesis has created a lot of skeptics. When it was new in 2009, shoppers weren’t sure if Hyundai could really build a luxury sedan—one that could compete with four-doors from Acura and Infiniti.

The first Genesis erased those doubts. Now Hyundai’s setting its sights even higher with the second-generation Genesis. With fresh styling and fresh technology, is it really ready to take on the vaunted German luxury sedans?

While it was an impressive first try, that first Genesis was styled a bit tame and conservative. The 2015 Genesis goes out of its way to fit in with the luxury competition, but in a more advanced way. The grille’s grown up and could be mistaken for the front end on an Audi. The wings on the badges? Bentley may not be thrilled with them.

From the rear the Genesis has the sloping roofline we’ve seen on everything from the Chrysler 200 to the Ford Fusion, to the Audi A7. It’s a great look, though clearly one we’ve seen before.

Inside the big Genesis gives up some of the last model’s vertical shapes for straight lines and sharp edges. It’s a good trade. It looks and feels more substantial. We also like that the dash hasn’t been scrubbed clean of real knobs and buttons.

As before, the Genesis is quite roomy and comfortable. The front seats are comfy and can be powered in as many as 12 directions. Wherever you look, you’ll find top-notch materials and very good fit and finish. It’s tough to find a miscue.

In back, adult passengers get plenty of leg and head room. You won’t have to worry about hitting your head when getting in or out, something we can’t say about the front-wheel-drive Hyundai Azera.

The one packaging issue? The trunk space which is rated at just 15.3 cubic feet. Some compact sedans have bigger trunks, and in the Genesis, there’s no fold-down rear seat—just a tiny pass-through.

Under the hood of the Genesis you’ll find either a six-cylinder or a V-8. Our car’s 3.8-liter V-6 engine made 333 horsepower, which seems like enough, but you can opt for a 5.0-liter V-8 rated at 420 horsepower. Fuel economy checks in as high as 29 mpg on the highway with the rear-wheel-drive V-6.

In either case, an eight-speed automatic is standard, and paddle shifters offer a bit more control. For the first time, the Genesis offers all-wheel drive, too.

After a few hundred miles of driving, we think the V-6 is the better choice for most drivers. The V-8 doesn’t feel as powerful as it should, and it puts a lot more weight on the car’s front end. The V-6 is lighter, and better balanced. The Genesis' steering is much better than we expected, especially since it’s gone completely electric—a move that hasn’t been kind to Hyundai’s Elantra and Sonata. Unfortunately the brake pedal is pretty mushy which leaves us with little confidence during quick stops.

The Genesis has now caught up to the best in the safety arena. It has the latest safety technology, everything from adaptive cruise control to lane-departure warning with automatic emergency braking. It’s also earned the IIHS's Top Safety Pick+ award.

The Genesis starts from just over $38,000 and even at that price, the “base” car isn’t very basic. You’ll find power front seats, rain-sensing wipers, a rearview camera, an eight-inch touch screen with navigation, BlueLink telematics and Bluetooth, not to mention this 4.3-inch display as part of the instrument cluster. Load it up with the V-8 and all the options including a head-up display and you’ll see a price tag of over $55,000.