With the 2015 Volkswagen GTI already on sale and the standard 2015 VW Golf set to hit dealers in August, both versions of the compact hatchback are proof that small cars can deliver big on safety.

The 2015 Volkswagen Golf and the sportier 2015 Volkswagen GTI just received the Top Safety Pick+ (TSP+) rating from the Insurance Institute for Highway Safety (IIHS) when equipped with the Driver Assistance Package.

The optional Driver Assistance Package available on the seventh-generation Golf and GTI doesn’t provide an auto braking feature, but it does provide a forward collision warning, which is enough for a “Basic” rating under the current 2014 TSP+ guidelines. In addition to forward collision warning, the Driver Assistance Package also adds front and rear Park Distance Control as a $695 option starting on the $22,095 2015 Volkswagen Golf S. 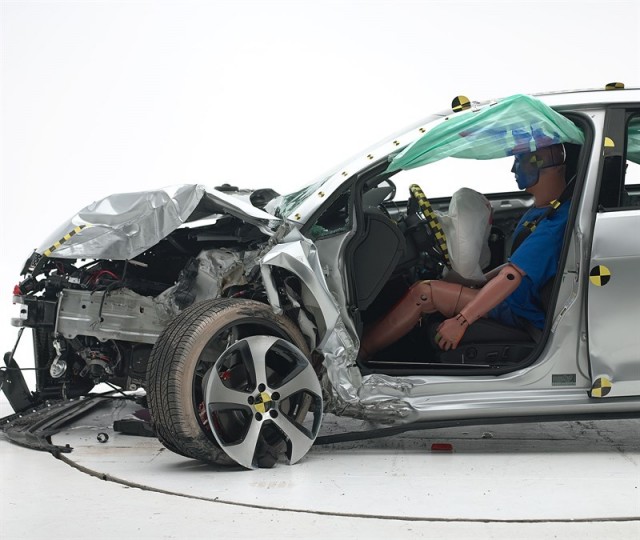 The IIHS recently announced that it was changing the TSP+ rating for 2015 requiring cars to get an “Advanced” or “Superior” rating in front crash prevention that requires some degree of automatic braking when a potential collision is detected. Under the new guidelines, the 2015 Golf (and GTI) will still qualify as a Top Safety Pick.

Matching the crashworthiness of the prior design, the 2015 Volkswagen Golf and GTI received top scores of “Good” for all other tests including roof strength and the small overlap front crash test. This latter test is displayed in all its brutality in the video above.