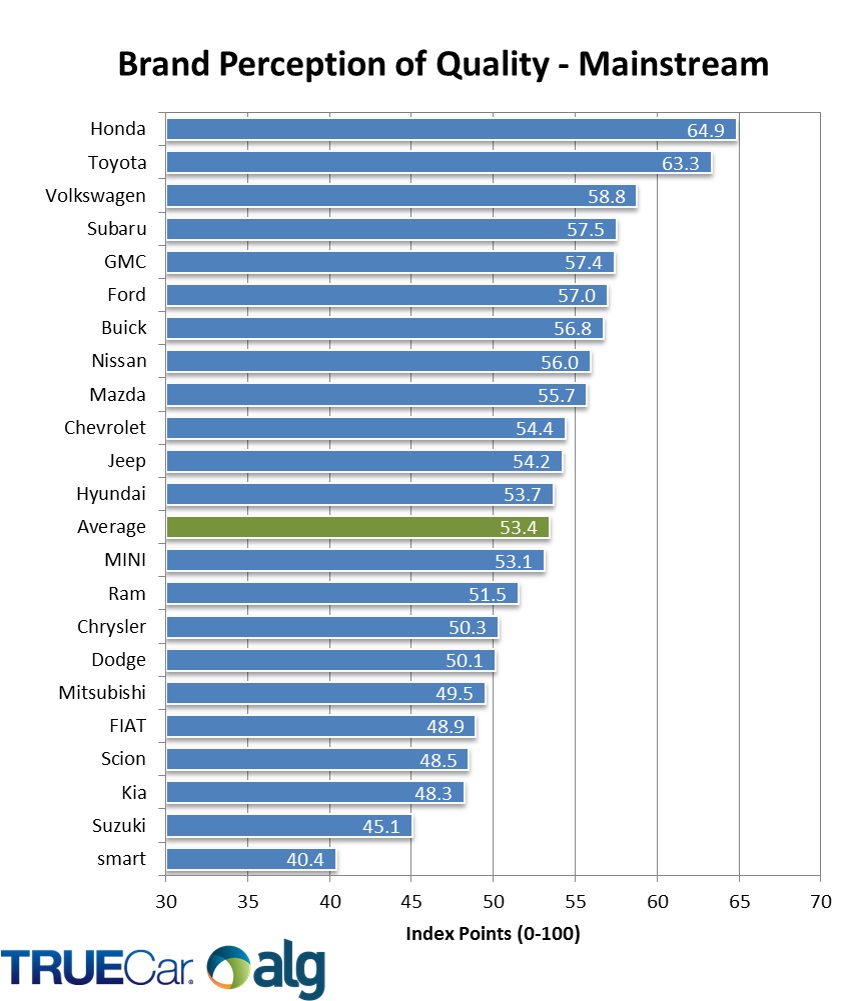 Consumer perception is a very important thing -- subjective, yes, but it can be the deciding factor in the battle between brands and technologies.

In the 1980s, for example, many consumers preferred the quality of Betamax tapes, but VHS offered longer recording times. VHS manufacturers waged a campaign to convince the public that quantity was more important than quality, and before long Beta tapes were tossed in the garbage. (Except in TV studios, that is, where high-quality Beta remained dominant for years.)

Similarly, car companies know that success isn't just a matter of building great vehicles, it's also getting shoppers to understand and believe that they're great. How can automakers tell if they're accomplishing that goal? Through reports like the Brand Perception Study recently conducted by marketing firm ALG.

For this iteration of the study, ALG polled some 30,000 recent car buyers and asked them to rank various brands on a scale of 0-to-100. It's important to note that respondents were those who'd actually purchased vehicles rather than members of the broader public. That gives automakers a slightly better picture of what active shoppers think of today's car brands.

Among mainstream brands, Honda was the winner, with an average score of 64.9. However, it was followed closely by Toyota, which scored 63.3. There was a significant gap between Toyota and the #3 winner, Volkswagen, rated a 58.8.

More often than not, the brands that scored above the industry average were Asian, with Subaru, Nissan, Mazda, and Hyundai all landing above the middle-of-the road mark of 53.4 points.

However, several American brands cracked the top tiers, too. As you'll see from the chart above, GMC was the best-ranked Detroit brand, with 57.4 points. Ford, Buick, Chevrolet, and Jeep also scored better than average with consumers.

At the far, far end of the scale, we find the little Daimler that couldn't, Smart, which averaged just 40.4 points among respondents. To add insult to injury, Smart finished well behind the next-lowest brand, Suzuki, which scored 45.1 -- and it's not even sold in the U.S. anymore.

Among luxury brands, Mercedes-Benz took top honors, with a score of 70.2, but Lexus, BMW, and Porsche were hot on its heels. Audi, Maserati, Infiniti, and Acura also finished above the luxury average of 63.1.

Sadly, U.S. luxury brands all fell below that line, with Cadillac scoring 62.6 and Lincoln landing at 60.9. But even those scores were higher than Tesla's 55.5. According to ALG, though, Tesla's score may improve as consumers become more familiar with the brand.

Alfa Romeo scored lowest in the luxury category, at 53.0 -- though in its defense, it hasn't officially re-entered the U.S. market yet.

For a look at the complete study, visit ALG.com.