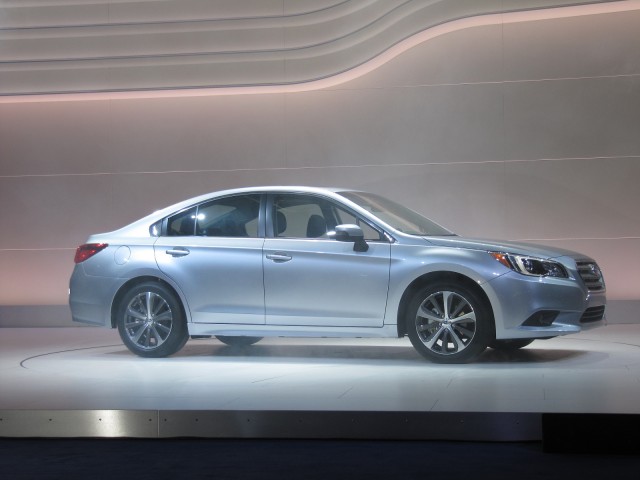 After holding a steady price for the last two model years, the new 2015 Subaru Legacy  is getting a slight price bump to go along with its new look, larger interior and more advanced features. The redesigned 2015 Legacy will start at $22,490 including destination, which is an increase of $1,400 over 2014. Even with that price increase and the fact that it comes standard with all-wheel drive, the 2015 Subaru Legacy will still be priced right in the heart of the mid-size sedan segment – lower than rivals like the Chevrolet Malibu, Toyota Camry and Nissan Altima – when it goes on sale this summer.

The starting price is for the 2015 Legacy 2.5i equipped with the 2.5-liter flat four-cylinder engine that gets EPA-estimated fuel economy of 26 mpg city and 36 mpg highway, and choosing the Partial Zero Emission Vehicles option on this engine adds an extra $300. Stepping up to the $24,290 Legacy 2.5i Premium adds equipment like dual-zone climate control, 10-way power driver’s seat, Bluetooth hands-free text messaging and a seven-inch touch screen for the infotainment system. There is also the Legacy 2.5i Limited for $27,290, which upgrades to leather seats, 18-inch wheels, a harman/kardon audio system and heated rear seats.

Opting for the more powerful 3.6-liter flat six-cylinder engine, the Legacy is only available in the 3.6R Limited trim for $30,390. In addition to the 256-hp engine that returns 20 mpg city and 29 mpg highway, it also comes with similar equipment as the 2.5i Limited as well as stainless exhaust tips and HID headlights. There are a handful of options, too, ranging from $1,195 for the Moonroof Package up to $2,990 for a package that adds moonroof, navigation, keyless start and Subaru’s EyeSight collision avoidance system.

Stay tuned later this week for our first drive of the 2015 Subaru Legacy.